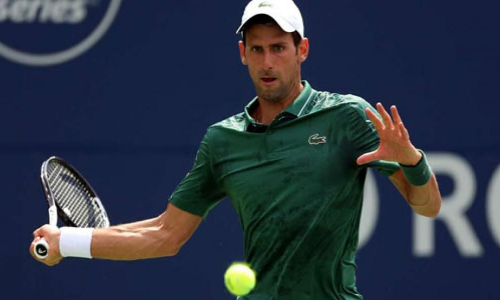 Novak Djokovic did not let a late switch in opponent throw him off his stride in his quest for a fifth Rogers Cup title as he subdued Bosnian lucky loser Mirza Basic 6-3 7-6(3) in first-round action on Tuesday.

Djokovic, the ninth seed, was originally scheduled to play Australian Open semi-finalist Chung Hyeon but the 22-year-old South Korean withdrew with a back injury about an hour before the match was due to start.

The Serb, competing in singles for the first time since his Wimbledon triumph last month, was never in real danger during the first-round clash, but he still needed some time to figure out Basic before wrapping up the match in 90 minutes.

"I've never played Basic. I've known him, I've practiced with him, but I've never played an official match so definitely not easy to find a rhythm from the beginning of the match," said Djokovic. "There were frustrations at times but that means I care."

The Serbian world number 10 was not as sharp as he will need to be if he hopes to triumph here for the first time since 2016, but it was enough on a day when Basic was misfiring on both his forehand and serve. Djokovic broke Basic in the sixth game of the first set to go ahead 4-2 and then wrapped up the opener three games later when he fired an ace down the middle.

The former world number one was up a break in the second set and cruising along until Basic broke back in the eighth game to draw level 4-4, leaving Djokovic yelling at himself in frustration while swatting a ball out of the court. Basic did well to hold serve and pull ahead, but the more experienced Djokovic kept calm and booked his place in the second round, where he will face Canadian Peter Polansky.