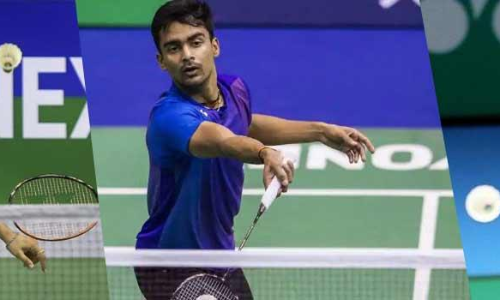 Second-seeded Saina, who is a three-time winner of the Lucknow tourney, took over Amolika Singh Sisodiya 21-14, 21-9. Whereas Kashyap who stood a winner in 2012 and 2015 recovered from a game down to knock out Indonesia's Firman Abdul Kholik 9-21, 22-20, 21-8 in another match. Kashyap will face Thailand's Sitthikom Thammasin who is seeded eighth.

Fourth-seeded B Sai Praneeth brushed aside Indonesia's Shesar Hiren Rhustavito 21-12 21-10 and will face China's Lu Guangzu who is sixth-seeded, ended the run of Saarlorlux champion Subhankar Dey with a 21-13 21-10 win.

In the mixed doubles match, Satwiksairaj Rankireddy and Ashwini Ponnappa also made a way in the last eight by defeating compatriots Shivam Sharma and Poorvisha S Ram 12-21, 21-14, 21-15.