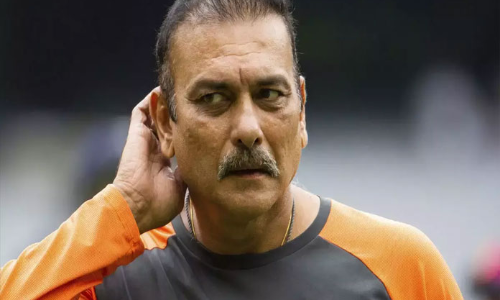 India beat Australia 2-1 to win their first Test series in Australia in 71 years and Shastri wasn't short of praise for his wards.

India defeated Australia 2-1 to win their first Test series in Australia in 71 years.

On Monday Shastri said "I will tell you how satisfying it is for me. World Cup 1983, World Championship of Cricket 1985? This is as big, or even bigger because it is in the truest (Test) format of the game. It's Test cricket, which is meant to be the toughest,"

He said that he believes in living in the present as he expectedly lauded skipper Virat Kohli. He further added, "Past is history, future is a mystery. We have won today after 71 years and I'd like to live in the present. And salute my captain for being the captain of the team that beat Australia for the first time in Australia in a series,”

Glowing in his praise, Shastri repeated what he has often said about the skipper, his passion and ability to lead from the front.

The former all-rounder praised Indian captain saying, "I don't think anyone plays Test cricket with more passion than he does. At least I don't see any other international captain coming close to him on the field when it comes to showing that passion needed to play the game,"

"He is very expressive, which is different to others. Other captains could have different personalities but Virat is someone who is in your face and it rubs off on all the youngsters who are watching the game in India," he tried explaining the skipper's persona.

According to the coach, the best part about Kohli is his ability to walk the talk by setting examples.

"The entire team that watches him, they want to emulate him. And to believe that they can be someone like him who can go out there and strive for excellence. So when an individual puts his neck on the line as captain then the others follow.

"And you have seen that transition happening over the last two-three years where guys in the team have become more and more confident, about their own ability and the ability of the team as well and it's made all the difference," he added.

For Shastri, the series win in Australia is a culmination of all the hard work put in during the year starting from the away series against South Africa in January, last year.

Ravichandran Ashwin's persistent injuries in foreign conditions have been a thing of worry but Shastri is happy that Kuldeep Yadav with his five-wicket haul could soon be in line for a permanent place in the Test line-up irrespective of conditions.

"Why abroad? Test cricket. Period. If Kuldeep can deliver like that, if he can improve, there could be a permanent place for him, for all you know. That's what we have done with this team. You mentioned Bumrah. You see Hanuma Vihari. You see Rishabh Pant. You see Mayank Agarwal. These are guys who have got opportunities this year.

The proud coach said, "There is Prithvi Shaw, who got an opportunity; unfortunately he is injured, but as many as six players have broken into the ranks. You don't see that many coming through in a year in an established team that is ranked number one. We have given the opportunities, and it is up to the guys to grab it,"