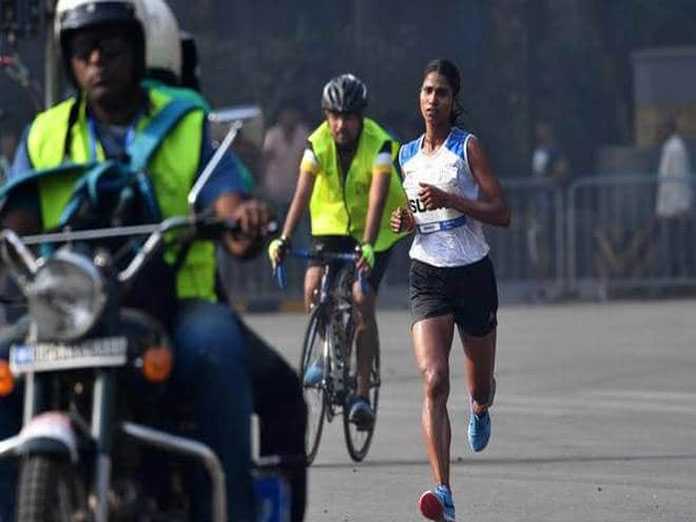 Cosmas Lagat of Kenya and Worknesh Alemu of Ethiopia surprised prerace favourites to win the mens and womens crowns respectively in the 405,000 Tata Mumbai Marathon here on Sunday

Sudha Singh finished on top among the Indian runners while setting at a personal best of 2:34:56
Cosmas Lagat of Kenya and Worknesh Alemu of Ethiopia surprised pre-race favourites to win the men’s and women’s crowns respectively in the $ 405,000 Tata Mumbai Marathon here on Sunday.

The course record of 2:08:35 of his own Kenyan compatriot Gideon Kipketar, made in 2016, just about survived the long-legged Lagat’s onslaught after he left behind all his rivals, including pre-race favourite Abera Kuma of Ethiopia, well behind his wake.

In second place was Aychew Bantie of Ethiopia in 2:10:05 while Akalnew Shumet, also from Ethiopia, took the third spot in 2:10:14.

The man with the best time going into the race, Kuma, finished seventh in 2:13:10 after he was with the lead bunch of 10 runners, including some pacers, on the sea link after 19 km before the bunch split up.

The women’s race also became a one-horse course over the last 5 km once Ethiopian Alemu split the field with 12 km left in the race.

Finally, she came home all alone well in front of the others, including pre-race favourite, compatriot and defending champion Amane Gobena, in 2:25:45, which was outside the course record.

Gobena came in second in 2:26:09 while another Ethiopian woman, Birke Debele, was third in 2:26:39 to mark a clean sweep for the African nation.

Sudha Singh the best among Indian runners
Significantly, Sudha Singh finished on top among the Indian runners while setting at a personal best of 2:34:56, but also dipped well under the qualifying mark of 2:37:00 set by IAAF for the September-October Doha World Championships.

Singh, a 3,000 m steeplechase specialist and winner of gold and silver medals in two Asian Games, finished 8th overall, ahead of former champion Dinkesh Mekash of Ethiopia who finished in 9th spot in 2:36:31.

Her earlier personal best in the marathon was 2:35:35 that she clocked while finishing 19th in the 2015 Beijing World Championships.

The Indian Railways athlete also bettered the national course record of 2:37:29 which previously stood in the name of O P Jaisha since 2015.

This was also Singh’s best finish among Indians for the third time in 16 editions, bringing her on par with Lalita Babar, who did it three times in a row between 2012 and 2014.