Anand on a roll beats Mamedyarov, shares lead with Carlsen 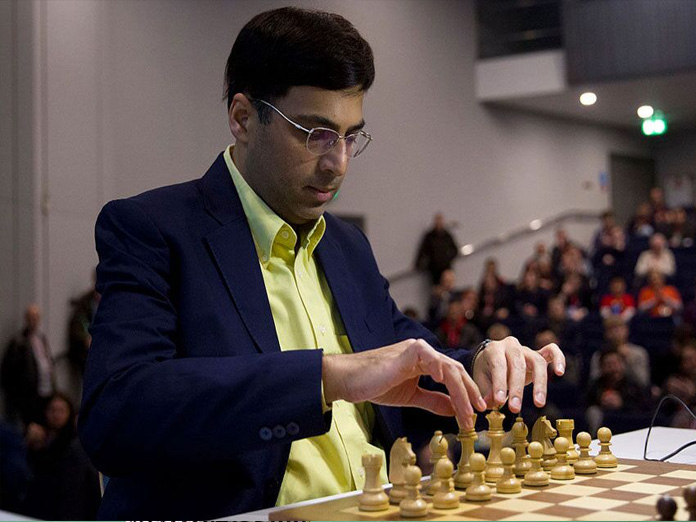 ​Wijk Aan Zee (The Netherlands): Five-time world champion Viswanathan Anand scored a crushing victory over Shakhriayar Mamedyartov of Azerbaijan in the eighth round to share the lead with Norway’s Magnus Carlsen in the Tata Steel chess tournament here.

Having outclassed Vladimir Kramnik of Russia as black in the previous round, Anand, a five times winner here, continued his demolition act and grounded Mamaedyarov who currently holds the third position in the world rankings.

The Indian ace took his tally to 5.5 points out of a possible eight and is matched only by reigning world champion Carlsen who himself played a fine game to beat Richard Rapport of Hungary. With two leaders in front, Ian Nepomniachtchi of Russia, Ding Liren of China and local star Anish Giri are right on their heels, tailing by half a point. Temour Radjabov of Azerbaijan is in sole sixth spot on 4.5 points while other Indian Vidit Gujrathi shares the seventh spot having four points in all.

Five rounds still remain in the first super tournament of the year. Wijk aan Zee has been Anand’s favourite hunting ground for over two decades and he seems to be again hitting his top form here. Mamaedyarov was outwitted in all departments of the game. The Caro Kann defense by the Azerbaijan GM met with the topical advance variation and Anand was in control after a slight inaccuracy by Mamedyarov on 12th move itself.

Anand increased his advantage in a flurry thereafter and struck in the centre with a smart pawn sacrifice. Mamedyarov was outdone thereafter as the Indian temporarily left his rook in the middle of the board and some moves later another tactic on the same square ended the game. It was over in 29 moves.

Carlsen was also in his elements as he avenged his defeat against Rapport a couple of years back in the same round of the same tournament. The Norwegian was in control right through in the Sicilian Taimanov game as white and squeezed out black’s resources.

Gujrathi played out a draw with Anish Giri. The fact these two also work together did not make things exciting as Giri opted for a Queen’s Gambit declined and Gujrathi did not do much. The players reached a rook and pawns endgame soon and the draw was a just result.

Vladimir Kramnik suffered another defeat as he lost to Jan Krzysztof Duda of Poland while Vladimir Fedoseev defeated American champion Sam Shankland in the other decisive games of eighth round.

Andrey Esipenko of Russia proved superior to R Praggnanandhaa in the battle of young Grandmasters held in the challengers section being held simultaneously. Mikhail Chigaev of Russia was in front on six points out of eight rounds while Praggnanandhaa was on 3.5 points needing some victories in the final lap.