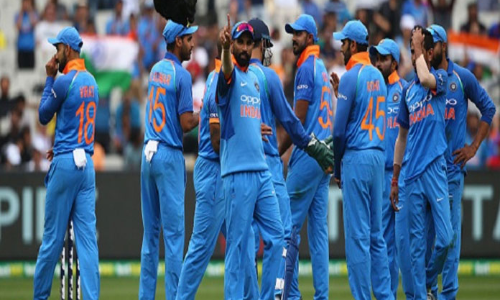 Napier:India rode chinaman Kuldeep Yadav and pacer Mohammed Shami's exceptional bowling effort on Wednesday to restrict New Zealand to a paltry 157 runs in the first of the five-match ODI rubber at the McLean Park here.

While Kuldeep's figures were 4/39, Shami was also phenomenal with the leather, scalping three Kiwi wickets conceding just 19 runs from his six overs.

Other than New Zealand skipper Kane Williamson (64), no other batsmen put up a fight against the disciplined Indian attack.

Opting to bat, the hosts had the worst possible start as Shami struck early sending back both the openers -- Martin Guptill (5) and Colin Munro (8), cheaply.

Newcomers Williamson and Ross Taylor (24) then tried to rescue their side from the early damage, taking New Zealand past the 50-run mark in 13.3 overs.

However, Taylor's stay was cut short by Chahal in the 15th over with the hosts at 52/3.

With the addition of just 24 runs in the Kiwi scorecard, Chahal struck again to dismiss incoming batsman Tom Latham (11). Jadhav and Shami then joined the party as they sent back Henry Nicholls (12) and Mitchell Santner (14), leaving the hosts reeling at 133/6.

Williamson, however, continued to show resistance and kept one end safe, but lacked support from the other end.

While trying to clear the fence in the 34th over off a Kuldeep delivery, the Kiwi skipper misread the ball and offered a simple catch to Vijay Shankar at long-on.

Kuldeep then put the final nail in the coffin, picking the tailenders -- Doug Bracewell (7), Lockie Ferguson (0) and Trent Boult (1) in quick succession to wrap up the host in just 38 overs.