Sarwate, Karnewar stand out to put Vidarbha on top 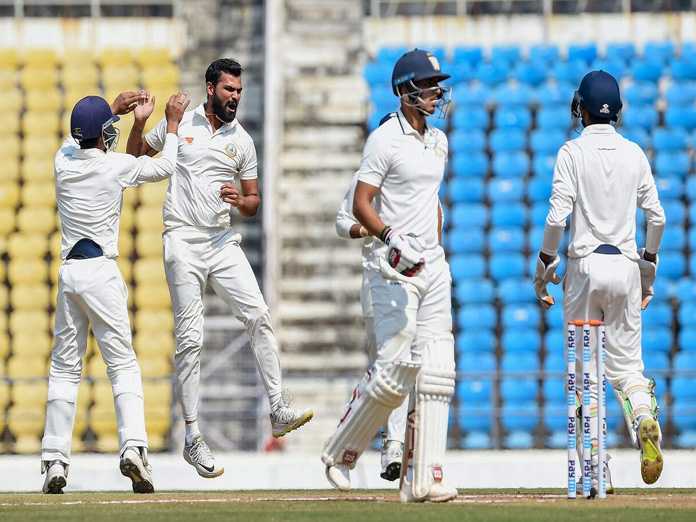 Leftarm spinner Aditya Sarwate scalped the prize wicket of Cheteshwar Pujara in a gamechanging spell to complement a splendid rearguard action that put defending champions Vidarbha on top in the Ranji Trophy final against Saurashtra, here on Monday

​Nagpur: Left-arm spinner Aditya Sarwate scalped the prize wicket of Cheteshwar Pujara in a game-changing spell to complement a splendid rearguard action that put defending champions Vidarbha on top in the Ranji Trophy final against Saurashtra, here on Monday.

After a depressing Sunday, it was an engrossing on Monday that entirely belonged to the home team. They first made a remarkable recovery to score 312 in their first innings after resuming at 200 for 7 and then reduced the visitors to 158 for 5 at stumps.

With spinners extracting significant turn and bounce exploiting the roughs, Sarwate (3/55) and off-spinner Akshay Wakhare (2/42) blew away Saurashtra's top half to seize the momentum.
Saurashtra were still trailing by 154 runs as only Snell Patel offered resistance with his fighting knock of unbeaten 87, which came off 160 balls and had 14 boundaries. Patel had survived an appeal for a close catch off Wakhare’s bowling when he was on 75. The TV replays showed that the ball did kiss his gloves before going to the forward short-leg fielder.

All-rounder Prerak Mankad was batting on 16 with Patel when second day's play ended. On a day when star India players Pujara and Umesh Yadav were in action, it was Vidarbha’s Sarwate and Akshay Karnewar (73 not out), who stood out with their splendid efforts.

Pujara scored just 1 while Umesh bowled 13 wicket-less overs though he did intimidate the opposition batsman with his pace and bounce. Sarwate did a huge favour to his side by cutting short Pujara's stay at the wicket to just 11 balls while Karnewar led their fight-back with dogged batting down the batting order.

The southpaw struck his second first class half-century and added 78 runs for the eighth wicket with Wakhare (34 off 78 balls) as Vidarbha added 112 runs in the first session. Pujara’s was a big wicket considering that he was India’s hero in their maiden Test series triumph in Australia and had also played a key role in Saurashtra’s two victories in back-to back knock-out matches.

Neverthless, Puajara had come good in second innings in both the triumphs and Saurashtra would hope that Patel and Mankad would continue to erase the deficit to keep them in the game.
Coming to bowl, Vidarbha brought Sarwate as early as in the third over and the move paid off immediately as he trapped Harvik Desai (10) with his third ball. It turned a bit after pitching in line and Desai, who was on back-foot, missed the line completely.

All eyes were on India pacer Umesh but in his first five-over spell he hardly troubled the batsmen, though he hit one on Patel's right biceps. The opener though was not perturbed and paced his innings beautifully. He easily rotated the stroke and also found three boundaries off Karnewar in the 18th over of the innings. The third was an exquisite cover drive while the first two were on the leg-side as moved to 30s.

Few minutes before the tea, Sarwate struk again and this time trapped Vishwaraj Jadeja, who made a painstaking 18 off 72 balls. It brought Pujara at the crease. Umesh was also back for his second spell and continued with his habit of firing it full-length on the middle and leg side. He again remained wicket-less. Sarwate though induced an edge from a circumspect Pujara and Jaffer took a low catch in the first slip at stroke of tea.

In the final session, Arpit Vasavada was dropped on zero by wicket-keeper Wadkar but the left-hander could not capitalise on the chance. Wakhare, later, had him caught with a sharp-turning delivery, which took the edge and went to Jaffer in first slip.

The off-spinner also sent back Sheldon Jackson (9), who was Saurashtra's joint hero in the semifinal against Karnataka. In the morning session, Saurashtra bowlers had to toil hard for 22 overs to get the first breakthrough, which came through left-arm paceman Chetan Sakariya.

Sakariya, who swung the ball nicely yesterday, could not move it much despite having new ball at his disposal. After seven overs from two pacers, left-arm spinner Dharmendrasinh Jadeja replaced Sakariya. Soon off-spinner Kamlesh Makwana was also brought into attack. Wakhare drove well against Unadkat and Makwana and did not hesitate to sweep Jadeja. Runs came thick a fast at a healthy run-rate of about four per over as the two batsmen raised their 50-run stand off 90 balls.