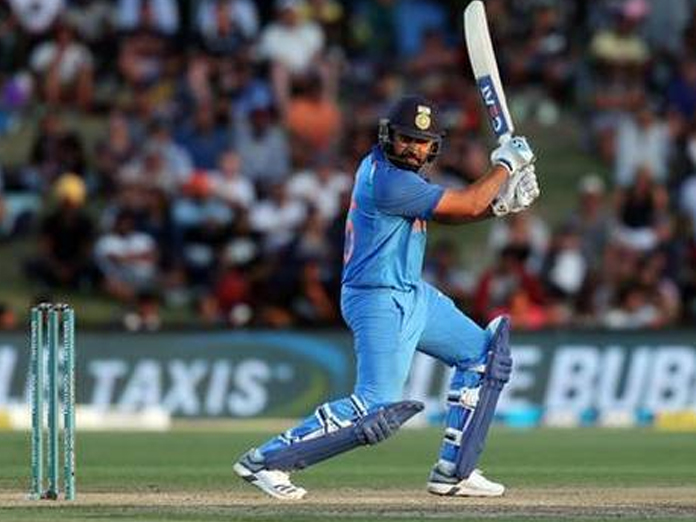 Auckland: Rohit Sharma became the highest run scorer in Twenty20 international history Friday as India romped to a seven-wicket win over New Zealand in the second T20 in Auckland.

Sharma top-scored for the tourists with 50 as India chased down New Zealand's modest 159-run target in 18.5 overs, levelling the three-match series at 1-1.

Sharma's knock was his 16th T20 half-century and took his career tally in the format to 2,288 runs, overtaking New Zealand's Martin Guptill on 2,272.

His team dominated New Zealand with bat and ball to avenge an 80-run loss in the opening fixture in Wellington -- India's heaviest ever T20 defeat.

Sharma, who is standing in as captain while Virat Kohli is rested, had demanded greater consistency ahead of the match.

His bowlers responded with early wickets as man-of-the-match Krunal Pandya took three for 28 and India restricted New Zealand to 158 for eight.

Colin de Grandhomme gave the Black Caps some hope, hitting a maiden T20 half-century off 27 balls as part of a 77-run partnership with Ross Taylor, who made 42.

But the hosts could not break the shackles and tight bowling at the death prevented them from taking advantage of Eden Park's short boundaries.

India had no such problem in reply, making a flying start with Sharma leading the way.

His 50 included four sixes and three fours off 28 balls.

There was ample support from Shikhar Dhawan, who made 30, and Rishabh Pant on 40 as India made 162 for three without looking troubled.

The final match of the series is at Hamilton on Sunday.