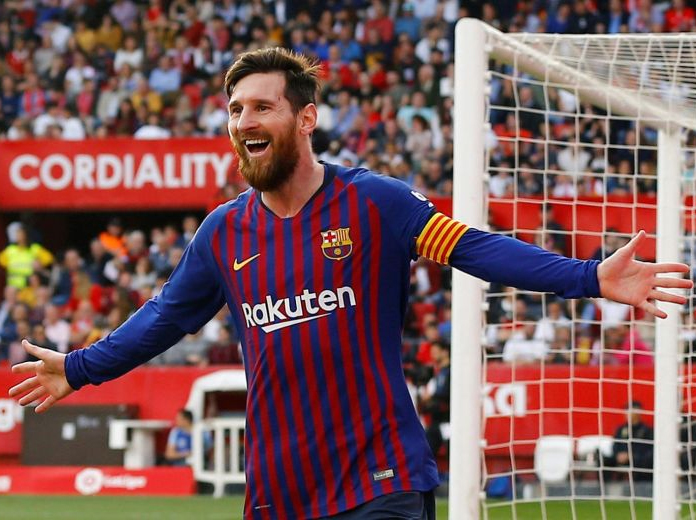 Lionel Messi scored his 50th career hattrick to fire Barcelona to a 42 win at Sevilla on Saturday after the champions had twice fallen behind, giving the Catalans a 10point lead at the top of La Liga

Sevile: Lionel Messi scored his 50th career hat-trick to fire Barcelona to a 4-2 win at Sevilla on Saturday after the champions had twice fallen behind, giving the Catalans a 10-point lead at the top of La Liga.

Sevilla, who have only won once in the league in 2019, took the lead midway through the first half through veteran winger Jesus Navas but were soon pegged back by an unstoppable volley from Messi.

The home side capitalised on sleepy defending from Barca to re-take the lead before halftime as Gabriel Mercado pounced in the area.

Barca coach Ernesto Valverde made two attacking changes at the start of the second period by introducing Ousmane Dembele and Sergi Roberto and got the intended reaction when the France winger laid the ball off to Messi just inside the area and the Argentine lashed it into the top corner.

Messi, who has struggled for form in recent weeks due to a niggling injury, looked on a mission to grab the winner and after twice coming close he completed his treble to put Barca ahead in the 85th minute, reacting quickly to a poor Sevilla clearance to dink the ball over goalkeeper Tomas Vaclik.

Luis Suarez made sure of the points by scoring deep in stoppage time, chipping Vaclik after being played through by a pass from Messi.

Barca lead the standings on 57 points after 25 games while second-placed Atletico Madrid have 47 but can reduce the gap back to seven when they host Villarreal on Sunday.

Sevilla fell to fifth, slipping out of the Champions League places behind Getafe.

“Messi is decisive and superlative, every team has decisive players but we have the best in the world,” said Barca coach Ernesto Valverde.

“It’s not just his goals either, but because he always delivers in the right place at the right time.”

Sevilla had endured a humiliating 3-0 loss at struggling Villarreal last week but before the game Valverde warned of the Andalusians outstanding record at their Sanchez Pizjuan, where they had thrashed Real Madrid 3-0 and beaten Barca 2-0 in the Copa del Rey this season.

They took the lead through a lightning quick counter-attack as Wissam Ben Yedder marauded down the pitch and played in Navas, who took one touch to control and the other to slide the ball through the legs of the diving Gerard Pique and beyond the outstretched Marc-Andre ter Stegen into the bottom corner.

Sevilla’s intensity prevented Barca from replicating their usual slick passing game and it took a superb goal from Messi to pull them level, the Argentine swivelling to meet a cross from Ivan Rakitic on the volley, leaving Vaclik with no chance.

Sevilla are Messi’s favourite victims, and last year he came off the bench to score twice in two minutes and rescue a 2-0 draw from 2-0 down.

He went one better this time and has now scored 36 times in 37 games against the Andalusians.

“It’s always tough to win here, we know what it is like to come to this stadium and how good Sevilla’s players are, they made things very hard for us by taking the lead but we knew how to overcome all that,” Messi added.

It was his 44th hat-trick for Barca, with 32 coming in La Liga, eight in the Champions League, three in the Copa del Rey and one in the Spanish Super Cup. He has also struck six trebles for Argentina.