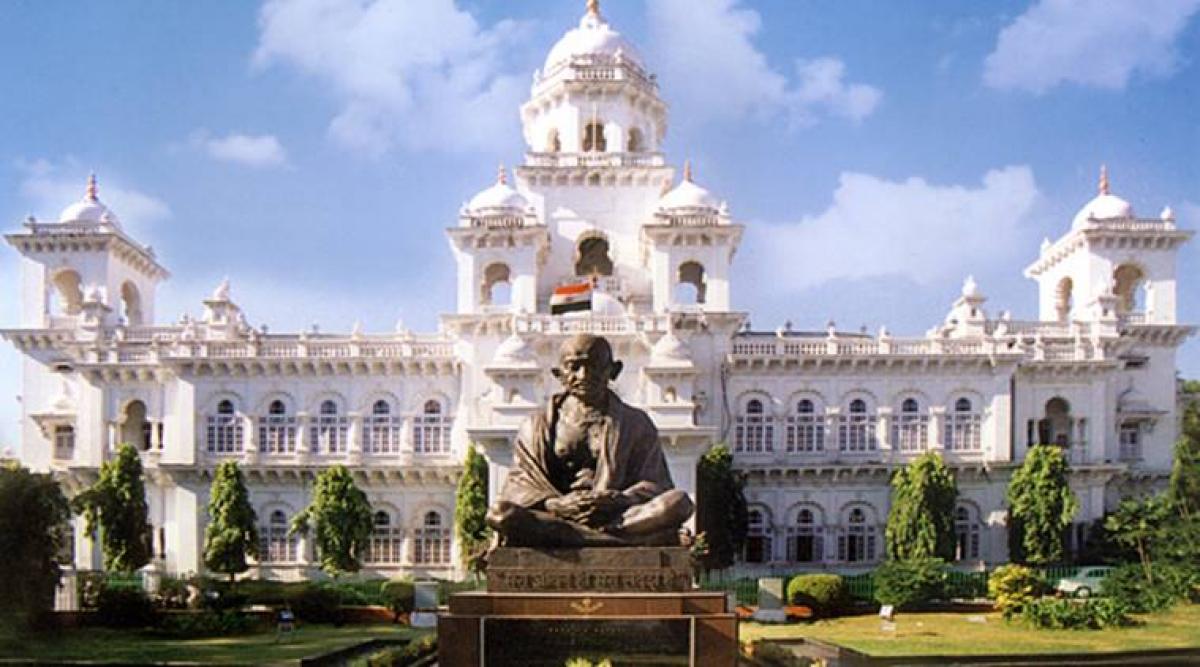 With all the five BJP members suspended for the day, the Telangana assembly on Sunday unanimously passed a bill to hike the reservation quota for backward Muslims and the Scheduled Tribes (ST) to 12 and 10 per cent respectively.

Hyderabad: With all the five BJP members suspended for the day, the Telangana assembly on Sunday unanimously passed a bill to hike the reservation quota for backward Muslims and the Scheduled Tribes (ST) to 12 and 10 per cent respectively.

Barring the Bharatiya Janata Party (BJP), which vehemently opposed the bill both inside and outside of the assembly, the entire Opposition supported the Backward Class, Scheduled Castes and Scheduled Tribes Reservation Bill, 2017, which will be now debated and passed by the state legislative council on Sunday evening.

As soon as the day-long special session of the legislature began, Chief Minister K. Chandrasekhar Rao moved the bill to raise from the existing four per cent to 12 per cent the quota for the socially and economically backward among the Muslims under the Backward Classes (E) category.

The reservations for the Scheduled Tribes in educational institutions and government jobs has been increased from 6 per cent to 10 per cent.

After the state legislative council passes it by late Sunday evening, the bill will be sent for the President's assent with a request to include it in the 9th Schedule of the Constitution as was done in the case of Tamil Nadu.

Replying to debate on the bill, Chief Minister Chandrasekhar Rao said if the Centre refuses to accept Telengana's request, the state would approach the Supreme Court.

The Supreme Court has put a cap of 50 per cent on all reservations both a the Centre and in the states.

The Chief Minister clarified that the reservations were being provided purely on the basis of socio-economic backwardness and not on the basis of religion or caste as some parties were project before the people.

Terming it as a historic day, Rao said the Telangana Rashtra Samithi (TRS) had during the election campaigns promised that quota for the Backward Classes (E) and the Scheduled Tribes will be increased in proportion to their population in the state.

Rao also said that the reservation for the SCs, who constitute 16.3 per cent of the state's population, will be increased by one per cent. He said the government would soon constitute an SC Commission.

The SCs are currently enjoying 15 per cent reservations while the BCs have a total quota of 25 per cent.

The legislation will increase the total reservations in the state to 62 per cent.

The Chief Minister argued that there is no constitutional bar on providing more than 50 per cent reservation.

The Telangana Chief Minister made it clear that he will not beg the Centre but will fight to get the new quotas included in the 9th Schedule.

KCR, as the Chief Minister is popularly known, said Telangana would raise this issue at the meeting of the Niti Aayog and in Parliament. He hoped that a debate on the issue will begin and consensus will build at the national level.

He defended the state's hike in quota for Muslims and hit back at the BJP for opposing it.

"Why can't we give them reservation? Why should they be denied reservation just because they are Muslims? Are they not part of this country," asked Chandrasekhar Rao in the absence of all five members of the BJP, who were earlier suspended for the day by the Speaker for disrupting the proceedings.

He pointed out that India has the largest Muslim community in the world and even some of the so-called Islamic countries do not have such a large Muslim population.

KCR said the promise to increase the Muslim quota was part of the TRS manifesto and people approved this agenda by giving their mandate to the party.

The All India Majlis-e-Ittehadul Muslimeen (AIMIM) suggested to the government to take steps to protect the existing four per cent reservation while increasing the quota by eight per cent. Its member Ahmed Pasha Khadri said a new category BC (F) be created for hiked quota.

The Chief Minister, however, said there was no need for any apprehensions as there will be no threat to the existing four percent reservations.