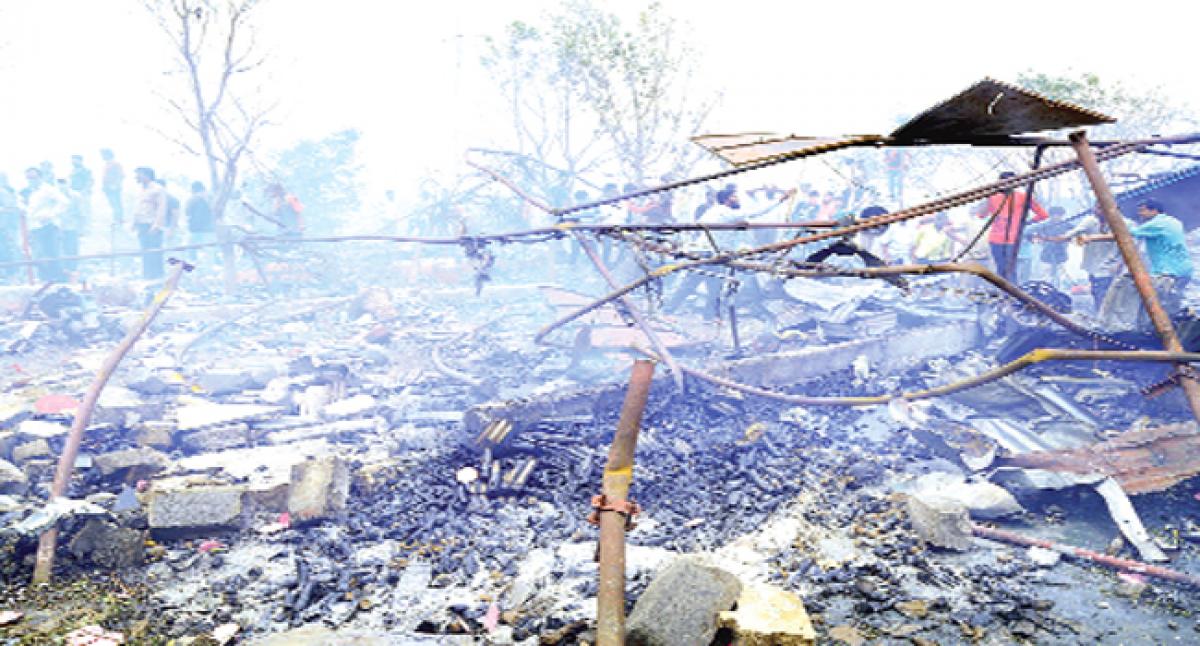 The fire accident, which led to high impact explosion at Bhadrakali Fire Works, a crackers manufacturing unit that killed many has made many families lose their bread winners and many children their mothers.

Warangal: The fire accident, which led to high impact explosion at Bhadrakali Fire Works, a crackers manufacturing unit that killed many has made many families lose their bread winners and many children their mothers.

Of all, the agony of the family members of the deceased Komati Sravani and her sister-in-law Bethi Srivani is indescribable. Sravani has got two daughters and Srivani has three daughters, who were in school at the time of the incident.

As the explosion claimed the lives of both men and women, a shock wave triggered by the explosion has also damaged their houses located close to the factory at Keerthi Nagar on the outskirts of Warangal. The blast impact has blown away the asbestos roofs of their houses along with windows and doors.

“We told them not to go to the crackers factory to work as it is dangerous to work there. But they didn’t listen. Who will take care of the children now?” said Sravani’s mother and relatives, weeping bitterly at the loss their beloved one as the husband of the deceased woman, Raju sat in a state of melancholy, holding his children in his arms.

The children of Sravani and Srivani, who returned from school after learning about the incident, are yet to come to terms with what happened to their mothers. The locals are so moved at the misery of the children that they asked every official at the spot to help the kids.

“The government should help the children, all aged below seven years, ensuring them good education and support all those, who lost their family members,” asked local women Bathula Sailaja, Sridevi and others. The locals, who rushed to the spot, were able to save a few and helped the police and fire personnel to salvage the corpses from the debris.

“I was standing at Kotilingala Temple near the factory and heard a high decibel explosion and rushed to the factory and able to save two persons,” said a youth Ladella Ramu, one among those, who first arrived at the spot.

Another resident of the area and a TRS leader B Motilal Naik told The Hans India that soon after the explosion they could see nearly 60 feet tall column of smoke emanating from the factory. The crackers burst for nearly half an hour and those reached the spot to rescue the victims had to run away.

“Entire unit is reduced to ashes within no time and the accident left behind a horrendous picture. All the workers are from poor background and their mutilated body parts blown away as long as 200 metres away from the factory along with the metal parts at the unit,” he noted.