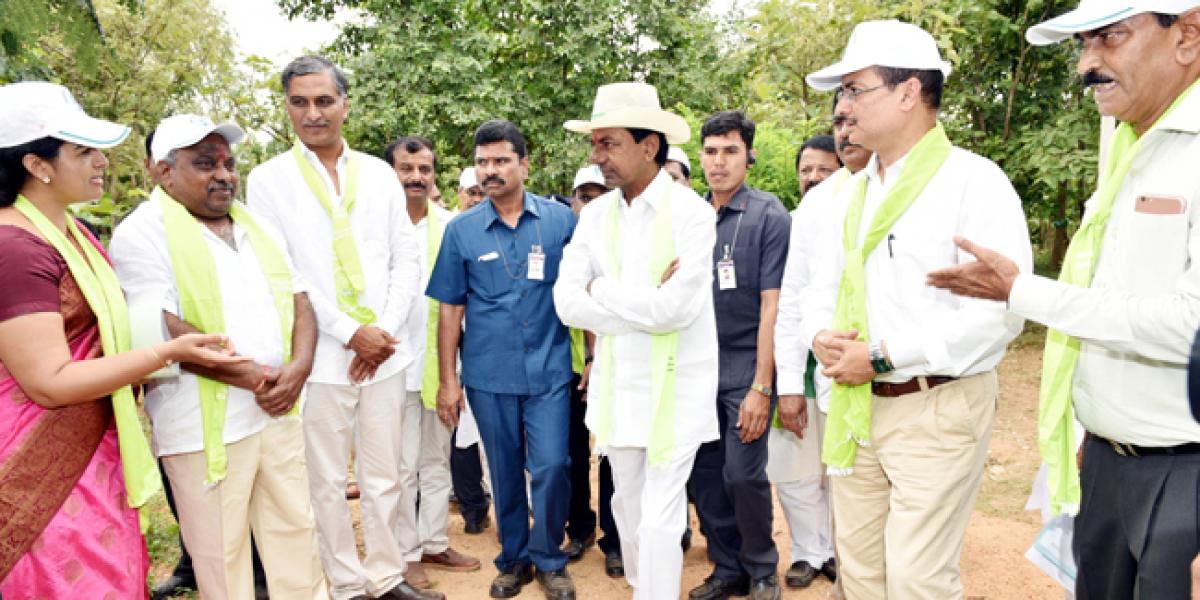 Aiming to promote the state as Green Telangana in future, Chief Minister K Chandrashekhar Rao on Wednesday launched a massive one lakh plus plantation programme in his Gajwel assembly constituency As part of the fourth phase of Haritha Haram, the Chief Minister toured extensively in Gajwel and took part in plantation programme at different locations

It was proposed that in the Gajwel municipality alone 1,00,116 saplings are to be planted. However, on saturation basis, 1,36,588 saplings were planted covering all areas within the municipal limits on a single day. When KCR initiated launching the plantation programme, there were clouds and moderate drizzle all around Gajwel area. In addition to Gajwel constituency, the CM also participated at four places in Medchal district, Turkapalli and planted saplings.

Saplings were planted in every house premises, roads, on outer ring road, public and private institutions, prayer places, government offices etc. Soon after the sirens were blown in the mosques, KCR announced the launch of plantation programme and simultaneously people planted the saplings in their localities. Saplings were collected from different nurseries which included tamarind, mango, allaneredu, karivepaku, munaga etc besides flowering and fruit bearing saplings.

Speaking on the occasion, KCR said that “if we protect the nature, it protects us. If nature exhibits its anger, then the existence of human beings becomes difficult. That is the reason why our elders educated us on worshiping nature so that the rain god bestows his blessings on us. And hence it is of utmost importance to plant saplings and save the nature.”

The CM instructed the Forest department officials to establish a Green Battalion to protect forests and the greenery in the state. If necessary and if required, the CM said that the department may take the help of police department. Each battalion should adopt one area in the forest and help in rejuvenating forest, he added.

On his way to Gajwel, KCR also visited Singayapalli forest belt and complemented the forest officials for protecting the forest area. Announcing a reward of Rs 5 lakh to the forest officers as an incentive, he suggested to the forest officers that it would be better if a “forest lunch” (Vana Bhojanalu) was organised for MLAs once. As many as 1,778 employees, 300 workers, 12,000 households and 45,000 population took part in the massive plantation programme.