Tourism activity comes to a nought 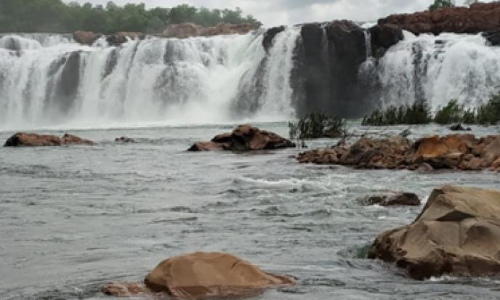 Tourism, one of the important sources of economic activity in erstwhile district of Warangal, especially in JayashankarBhupalpally district, which is endowed with temples and lakes of Kakatiya era besides spectacular laidback destinations, has come to a grinding halt due to continuous spell of rains for the last 10 days

Warangal: Tourism, one of the important sources of economic activity in erstwhile district of Warangal, especially in Jayashankar-Bhupalpally district, which is endowed with temples and lakes of Kakatiya era besides spectacular laidback destinations, has come to a grinding halt due to continuous spell of rains for the last 10 days.

With copious rains upstream Chhattisgarh, Bogatha waterfalls that emerges from the Cheekupally stream has been in spate thus forced the authorities to close the entry for visitors some 10 days ago.

For the last couple of years, Bogatha falls is a big draw for the tourists. Considering its tourism potential, there is a huge developmental activity near Bogatha falls, 130 kms from Warangal and 270 kms from Hyderabad, which has a footfall of around 5,000 visitors in the weekends and about 2,000 visitors in normal days.

In the wake of some bitter experiences of drownings, the authorities closed it as a precautionary measure. It not only affected the revenues of the government but also had an impact on tourism dependent economy.

The situation is similar at Laknavaram lake. The picturesque lake and its hanging (suspension) bridge surrounded by lush green forests surely stump the tourists. The ongoing construction of another suspension bridge at the lake indicates its captivating potential.

At an average of 50,000 tourists a month visit the lake from across Telangana, Andhra Pradesh, Chhattisgarh and other states. Realising the tourism potential, the authorities added luxurious wooden cottages on an island in the lake.

With the authorities closing the entry to the lake following huge inflows for the last few days, it invariably affected the revenues of hospitality sector, entry fee and boating. It may be noted here that a few days ago, the water level at the lake touched the suspension bridge making entry into island inaccessible.

A police picket was posted at Bussapur Cross Road on the National Highway-163 to stop the tourists heading to lake. Unaware of this, a huge number of visitors every day had to return disappointingly.

Ramappa temple and its lake, Mallur temple, Pandavulaguttalu (hillocks that house rock paintings of pre-historic age to medieval times) and Eturnagaram Wildlife Sanctuary are also among the top tourist destinations in the region that have been facing the spiralling effect.

Speaking to The Hans India, Bhupalpally ecotourism coordinator Kalyanapu Suman said: “Normally, tourists heading to this part of the region plan a combo tour of Ramappa, Laknavaram, Tadvai ecotourism events, Bogatha waterfalls and Mallur temples or at least two or three of them.

Laknavaram and Bogatha falls are two top draws for the visitors. With both of them inaccessible, its impact fell on other destinations. Ecotourism activity and Tadvai huts which have become popular of late drawing a damp squib at the moment. The booking of Tadvai huts that went online recently are sparsely occupied these days.”

According to district administration, visitors will be allowed to Laknavaram and Bogatha falls in a couple of days. As a result, tourism-dependent economy of the rural-centric Bhupalpally district took a huge dent. Hundreds of shops, hotels and petrol bunks located alongside NH-163 finding it difficult without business. The impact is also on transportation services.

Gorantla Vijay Kumar, site guide at Ramappa temple, which is vying for UNESCO’s World Heritage tag, said that tourist footfall has come down drastically due to incessant rains.

Warangal Seva Tourism and Cultural Society founder president Kusuma Surya Kiran said: “It’s been a bleak fortnight for tourism activity in Warangal which has abundant historical places and pleasant getaways. It’s high time for the administration to address lacunae in the infrastructural facilities.”