Requests for jobs, pattas pour in on Grievance Day 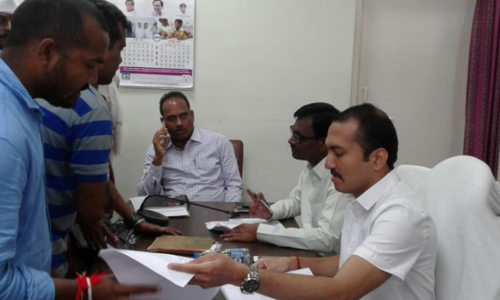 Asifabad: District Collector Prashanth Jeevan Patil along with other officials received as many as 60 grievances from people on Grievance Day at the Collectorate meeting hall here on Monday.

People from all corners of the district attended and submitted their complaints directly to the Collector. Shankar of Sandeep Nagar in Asifabad appealed the Collector to issue patta for his land; Prasad of Kagaz Nagar requested to give permission to set up SBI common service number; Shankar of Muthyampet village, Kotala mandal sought to issue patta to his podu lands; Suresh of Kagaz Nagar requested to grant subsidy of 2017-18; and villagers of Gudem, Chintalamanepalle mandal requested the Collector to sanction loans based on their lands.

Surender of Sirpur U requested Collector Patil to provide a job to him; Dileep of Thatipalli village, Kotala mandal sought to issue patta to his land bearing survey no: 31/8; and Lalitha of Anarpalli village, Kerameri mandal requested the Collector to provide her job in Ashram Patashala. The Collector received all the applications and instructed the officials concerned to solve all the grievances with immediate effect.

Collector Patil handed over a cheque for Rs 2 lakh to Padma (nominee), whose son Matla Navin of Chirrakunta village of Asifabad, paid Rs 330 per month under Pradhan Mantri Jeevan Jyothi Bima Yojana policy and later died in an accident. Patil also gave Rs 2 lakh cheques to Lakshmi (nominee) as Boyina Ramaiah of Chirrakunta died due health problems and to Ganapathy (nominee), as Durgam Leela of Ullipitta village of Tiryani mandal, who died due to health problems.