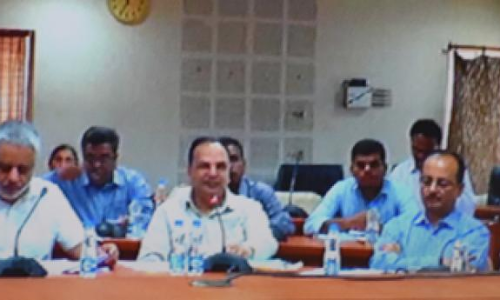 Chief Secretary of the State government, SK Joshi on Tuesday ordered the Collectors of all districts to make necessary arrangements for distribution of Batukamma sarees, keeping in view of coming up Batukamma festival in the month of October

Khammam: Chief Secretary of the State government, SK Joshi on Tuesday ordered the Collectors of all districts to make necessary arrangements for distribution of Batukamma sarees, keeping in view of coming up Batukamma festival in the month of October.

He held a video conference with Chief Secretaries of the Forest Department Ajay Mishra and Industries Department Jayash Ramjan, Secretary of the Minority Welfare Department Dhana Kishore and Director of Handloom Department Shailaja Ramayyar besides the Collectors of all districts from Hyderabad.

The Chief Secretary reviewed the ongoing works related to Haritha Haram, minority welfare programmes, implementation of welfare programmes for handloom workers and arrangements to be made for distribution of Batukamma sarees.

Joshi ordered the Collectors to identify godowns for storing the Batukamma sarees until they are distributed along with taking measures for distributing them perfectly from village level.

He also asked the Collectors to expedite the land acquisition related to widening of National Highways and construction of minority students hostels sanctioned under Pradhan Manthir Janvikas Yojana and reviewed the ongoing Kanti Velugu programme.

Complete process of planting of saplings under fourth phase of Telanganku Haritha Haram by the end of September, he added. The Chief Secretary of the Industries department Jayash Ramjan said committees must be formed from village to mandal and district level for distributing the Batukamma sarees to about 1.8 crore of white ration card holders along with conducting orientation programme by the end of September.

He said about 17,000 handloom workers are enrolled under ‘Nethanna Ku Cheyutha’ scheme till date which would be implemented by investing Rs 60 crore. He ordered the Collectors to take measures for enrolling the remaining handloom workers under the scheme.