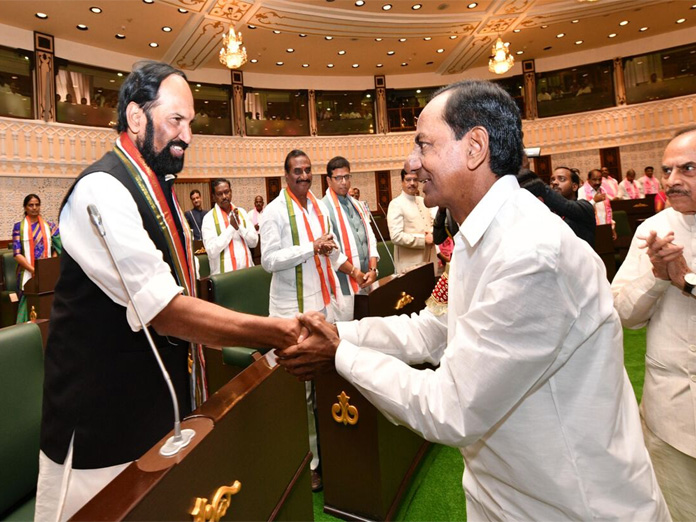 ​Hyderabad: Suspense on cabinet formation is likely to continue for some more days as the aspiring ministers did not get any clue during the meeting with Telagnana Chief Minister K Chandrashekar Rao in Assembly on Thursday.

The MLAs were seen making a beeline towards the Chief Minister’s chambers as a courtesy call. Among them were senior leaders, including former deputy chief minister K Srihari, Ch Laxma Reddy and others. Sources said that the senior leaders did not get any indication about the formation of cabinet during their meeting. Currently, Home Minister Mohd Mahmood Ali is the lone minister in the KCR cabinet.

Speculation is doing rounds that the cabinet expansion will be done soon after the election of Assembly Speaker on Friday. The leaders are of the strong view that KCR will form the cabinet before Governor’s address to both houses of Assembly and Legislative Council on Saturday.

Another option being mulled by KCR, according to party leaders, was to defer the cabinet formation till January end. If KCR opts for the second option, then it would be only after the 5-day Maharudra Sahitha Sahasra Chandiyagam which would be performed at the farm house of KCR in Erravelli village from January 21.

It is learnt that KCR is going cautiously in finalising the list of ministers and was exploring all the political equations required for the Lok Sabha elections to be held in April. As the chief minister also decided to present vote on account in the place of annual budget, leaders said that the cabinet formation will be delayed further since there is no requirement of ministers to prepare the vote on account.