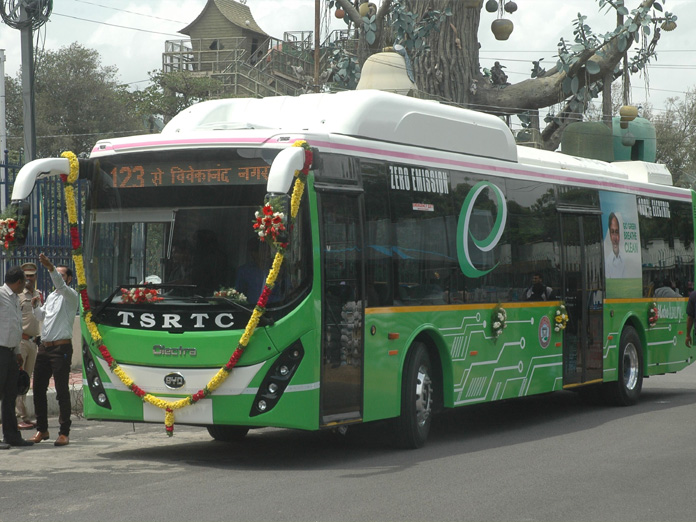 ​Hyderabad: Hyderabad will be the first city in the country to run electric buses that have been sourced under the central government’s FAME India scheme.

The FAME India (Faster Adoption and Manufacture of Hybrid and Electric Vehicles) Scheme was launched by the Union Ministry of Heavy Industries and Public Enterprises in 2015 to incentivise the production and promotion of eco-friendly vehicles, including electric vehicles and hybrid vehicles.

FAME India is a part of the National Electric Mobility Mission Plan. The thrust of FAME is to encourage electric vehicles by providing subsidies.

Although 10 other states are inclined to run these electric buses, Telangana has moved in that direction on the fast track. Hence, in around one week’s time, these buses would be on roads, connecting various parts of the city to the Rajiv Gandhi International Airport. According to TSRTC officials, the corporation has got under FAME scheme 40 new electric buses, which would be used for airport shuttle service.

A senior official said that States like Gujarat, Karnataka and Maharashtra too have decided to go for the electric buses under the FAME scheme, but Telangana has been in the forefront to get the first lot of buses.

The official said that these buses could run for 300 km once it is charged. Although the buses, when fully charged, can run up to 400 km, the prevailing road conditions and traffic in the city might limit it to 300 km per charge. The corporation has provided charging facilities at two depots, including Miyapur and Cantonment. It would take at least four and half hours for a vehicle to get fully charged. Trial runs were taken up at Miyapur and JBS and they were successful, said the official.

The buses would be air-conditioned, and it would have surveillance cameras, apart from wheel chairs for differently abled persons. The electric vehicle company Olectra has procured these buses, which would be owned and operated by them.

The corporation would be providing Rs 35 per kilometre for the bus, which has seating capacity of 38 plus one. According to officials, the corporation would get to save Rs 40 crore annually. The old airport liners would be replaced with these new buses. Each bus costs Rs 2.5 crore and the Centre is providing a subsidy of Rs 1 crore per bus under the FAME scheme.

The official said that as of now 38 of the 40 buses have arrived. The rest would be in place within five days. He said that the buses would be operated within a week.