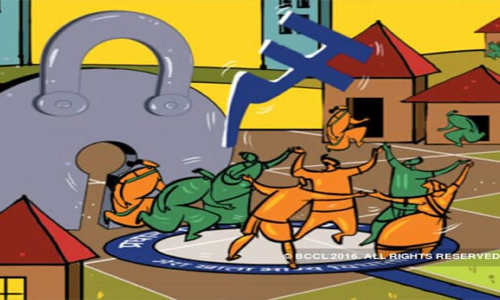 Cabinet ministry of Mr. Narendra Modi opened Pradhan Mantri Jan-Dhan Yojana all over India and it is predicted that this effective scheme may prove to be beneficial for country

After satisfactory operation of the account for 6 months, an overdraft facility will be permitted

Access to Pension, insurance products.Accidental Insurance Cover, RuPay Debit Card must be used at least once in 45 days.
Overdraft facility upto Rs.5000/- is available in only one account per household, preferably lady of the household.

By default, all the zero balance account opened under are Pradhan Mantri Jan-Dhan Yojana (PMJDY) are Basic Savings Bank Deposit Account (BSBDA). BSBDA has been defined by RBI vide its circular dated 10.08.2012. Its salient features are
These facilities are to be provided without any extra cost.

2. It focuses on coverage of rural as well as urban areas. Earlier plan targeted only villages above 2000 population while under PMJDY whole country is to be covered by extending banking facilities in each Sub-Service area consisting of 1000 – 1500 households such that facility is available to all within a reasonable distance, say about 5 Km.

3. Any individual above the age of 10 years can open BSBDA Account.

4. Rupay Debit Card is an indigenous domestic debit card introduced by National Payment Corporation of India (NPCI). This card is accepted at all ATMs (for cash withdrawal) and at most of the PoS machines (for making cashless payment for purchases) in the country.

6. To get benefit of Accidental Insurance Cover, RuPay Debit Card must be used at least once in 45 days.

7. Overdraft facility upto Rs.5000/- will be available to one account holder of PMJDY per household after 6 months of satisfactory conduct of the account.

8. To avoid duplication Aadhaar number will also be required. If Aadhaar number is not available then Bank will do additional due diligence and also seek declaration from the beneficiary.

9. Overdraft facility upto Rs.5000/- is available in only one account per household, preferably lady of the household.

10. Reserve Bank of India (RBI) vide its Press Release dated 26.08.2014 has further clarified as under: “Those persons who do not have any of the ‘officially valid documents’ can open “Small Accounts” with banks.

11. A “Small Account” can be opened on the basis of a selfattested photograph and putting his/her signatures or thumb print in the presence of an officials of the bank.

13. Thereafter, such accounts would be allowed to continue for a further period of twelve more months, if the account-holder provides a document showing that he/she has applied for any of the Officially Valid Document, within 12 months of opening the small account.

Rupay Debit Card is an indigenous domestic debit card introduced by National Payment Corporation of India (NPCI). This card is accepted at all ATMs (for cash withdrawal) and at most of the PoS machines (for making cashless payment for purchases) in the country.

Under the PMJDY scheme the account holders will be given worth Rs.30000 insurance coverage if they comply with certain specification of the scheme which includes opening an account by January 26, 2015 and having an accidental insurance coverage of over Rs. 200000.

Various studies have made noteworthy points which show success of PMJDY scheme.

The government’s flagship financial inclusion drive, by virtue of sheer scale, is one of the grandest policy initiatives of its kind. With an initial target of opening 75 million accounts by January 2015. The government mobilized an oft-recalcitrant state apparatus to expand access to basic savings accounts with additional benefits in the form of debit cards, insurance cover, and overdraft facilities. Working at breakneck speed, the government has opened more than 294 million accounts as of August.

As per the website of PMJDY, as of 16 August, there were 295.2 million beneficiaries or account holders, with a total bank balance in their accounts of Rs658.45 billion (a little over $10 billion). That is a little under half a per cent of the Indian gross domestic product (GDP) of around Rs150 trillion. It is similar to the mobile phone connectivity that India achieved for its citizens in the first decade of the millennium.

More needs to be done

The PMDY is a success story. Discuss how it has been successful in ensuring financial inclusion. What lessons can government take from the success of the scheme.

Government policies and interventions for development in various sectors and issues arising out of their design and implementation.