INDIA AND ITS ANCIENT CULTURE 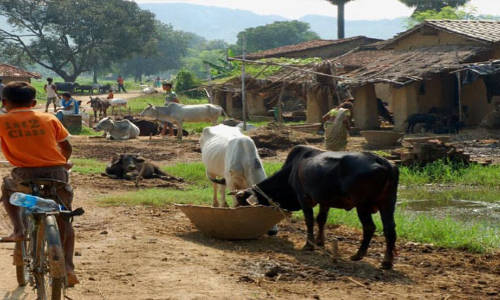 The ancient civilization of India grew up in a sharply demarcated subcontinent bounded on the north by the Himalayas with its extension from east to west.

The ancient civilization of India grew up in a sharply demarcated subcontinent bounded on the north by the Himalayas with its extension from east to west.

The Himalayas divide India from the rest of Asia and the world. Though it divides India, this barrier was no time insuperable one and both the traders and settlers have found their way over the high and desolate passes into India, while Indians have carried their commerce and culture beyond her frontiers by the same route.

The ancient civilization of India differs from those of Egypt, Mesopotamia and Greece in that its traditions have been preserved without a break till the present. India has the oldest continuous cultural traditions in the world.

Paleolithic man was a hunter and food gatherer usually Nomadic. Man learnt to grow food, tame doestic animals, to make pots and weave garments. Stone implements were used. Developed agriculture and permanent villages began in 7th Millennium BC in the middle East. In India the earliest remains of settled cultures àre of agricultural villages in Baluchistan and Sind dating back to 4th millenium BC.

These people belonged to several cultures, primarily distinguished by different types of painted pottery. They knew copper metal. The villagers dwelt in comfortable houses of mud brick. Their religion was similar to the religion practised by other early agricultural communities in the Mediterranean and middle East centring around fertility rites and worship of a mother goddess. There was trade between the villagers and Mesopotamians only through sea.

In the early part of 3rd millennium BC, the civilization became organised over a comparatively large area. We know a great deal about the civilizations of Egypt and Mesopotamia for they have left us written materials which have been deciphered. The Indus people did not engrave inscriptions on stone, all we know about them was of their writings derived from the brief inscriptions on seals. Hence our knowledge of Harappan civilization is inadequate.

The greatest triumph of the archaeological survey of India under Sir John Marshall's directorship was undoubtedly the discovery of the Indus civilization. The first relics of India's oldest cities were noticed by Alexander Cunningham, the father of Indian archaeology who found strange unidentified seals in the neighbourhood of Harappa in the Punjab.

In 1922, an Indian officer of the archaeological survey R.D.Benarjee found further seals at Mohenjodaro in Sind which were recognised as the remains of a pre Aryan civilization of great antiquity. Sir.R.E.Mortimer wheelers further contributed for the further important discoveries at Harappa. Harappa on the left bank of the river Ravi in punjab and Mohenjodaro on the right bank of Indus were the two major cities. New cities such as kalibangan and Lothal have been excavated recently.

The pattern of this civilization was so uniform that even the bricks were usually of same size and shape. Outside the cities, the village cultures of Baluchistan seem to have continued. The great civilization owed little to the Middle East. The cities might have been built by the indigenous people who had probably been in Indus valley for several centuries.

Many of these cities were divided into two or more parts. Usually, the part to the west was smaller but higher. This is described as citadel. The part to the east was larger but lower known as lower town. The two were separated sometimes by a wall. The bricks used were baked and placed in and interlocking pattern and that made the walls stronger.

Special buildings were constructed in citadel. For example in Mohenjo Daro a very special tank, 'great bath' was built. In other cities such as kalibangan and Lothal fire alters were found, where sacrifices might have been performed. Granaries were also found which were used for storing grains.

The Houses either single or two storied had separate bathing area and some even had wells to supply water. Many of these cities had covered drains. The unique sewerage must have been maintained by a municipal organisation. No other civilization until that of Rome had so efficient a system of Drains.

The most striking feature of the culture is its conservatism, for nearly a millennium, the street plan of the cities remained unchanged. The roads and streets were laid out along grid patterns intersecting at right angles. This type of street planning is continued in India even today.

The layout of the great cities suggest that there existed a rather centralised state than a number of free communities. However, much light has not been thrown on this aspect.

The prevalence of agriculture is indicated by finds of grains. Representation on seals indicate that oxen were used for ploughing. Archaeologists have also found evidences of ploughed field at Kali bangan. Irrigation was required for agriculture and traces of canals were found in harappan site of Shortughai in Afghanistan. Water reservoirs found in Dholavira might have been used to store water for agriculture.

The main food crops of the Harappan people were wheat, barley, sesamum and peas. No clear evidence of rice cultivation was found. Cotton was also grown and was exported to mesopotamia.

Harappan people also reared animals such as humpless cattle, sheep, goat, asses, pigs, dogs, buffalo and the domestic fowl. Domestic fowl was most widely appreciated india's gift to the world. Among wild animals elephant was domesticated, water buffalo and rhinoceros were known. Harappa people may have known horse since a few horse's teeth have been found in the Baluchistan site.

Many of their metals and semi precious stones came from longer distances. Silver, turquoise and lapis lazuli was imported from Persia and Afghanistan. Copper came from Rajasthan, jadeite came from Tibet and gold from karnataka.

They were not on the whole artistic people. Their architecture was austerely utilitarian. No trace of monumental sculpture has been found. Their most notable artistic achievement was their seal engravings, especially those of animals. Equally interesting are some human figurines, most striking of the figures is the "bronze dancing girl". They made beautiful beads of semi precious stones and faierce and pottery was mostly plain with few specimens delicately painted.

Recent archaeological findings suggest that copper was also probably brought from Oman. A distinctive type of vessel, a large Harappan jar coated with a thick layer of black clay has been found at Omani sites which suggests the traces of foreign contact as well.

The traces of Nickel at mesopotamia , Harappan seals, weights, dice and beads also suggets the foreign contacts. The Mesopotamian texts mention contact with the region named Meluha possibly the Harappan region might also suggest that the Harappans had contacts with these civilizations. Mesopotamian texts refer to Meluha as a land of seafarers. Besides this we find depictions of ships and boats at seals.

A dockyard at Lothal was also found , where boats and ships came in from the sea and through the river channel. Goods were probably loaded and unloded here.

The civilization of Harappa like those of Egypt and Mesopotamia was theocratic in character. The most striking deity of Harappa culture is the horned god of the seals. Sir.John Marshall called this deity as "Proto-Shiva" who has been known in the later Hinduism as the fertility deity known as "pashupati", "lord of beasts".

Animals played a big part in the religion of the Indus people. Certain trees were sacred, as they are in Hinduism today, notably the pipal. Phallic worship was an important element of harappa religion. The Phallic or Linga emblem in later Hinduism is the symbol of the god Shiva.

There are certain evidences for worship of the mother goddess which reappeared after a lapse of about 1000 years from the fall of Harappa, in Hinduism. It appears that burial was the usual rite and dead were buried along with pottery vessels and personal ornaments. This might be an evidence for the belief of Harappans in life after death.

The script had some 270 characters, which were evidently pictographic. It may have been inspired from the earliest Sumerian script. The script was totally unchanged throughout their history. Seals were used for doing business. The seal was made of soft stone called steatite. Their primary purpose was to mark the ownership of property. All we know about the harappan script was from these seals. This script has not yet been deciphered completely till today.

The end of the Indus civilization is a mystery. Several archaeologists have given several theories related to the end of this civilization. It is believed that the 1st to suffer were the Baluchistan villages.

The horse riding invaders who were the barbarians might be the enemies to the harappa's existence. After barbarians had conquered the outlying villages the ancient laws and rigid organisation of the Indus cities must have suffered great strain.
The city of mohenjodaro became overpopulated and law and order was less well kept because the barbarians were raging the provinces and the city was full of newcomers.

Though the barbarians were unsophisticated in many respects their superior tools and weapons overpowered the Indus people. In other parts of India, however the impact of the invaders was not immediately felt and it appears that the Harappa City lothal in Gujarat survived long after its parent cities had fallen and its culture seems to have developed gradually, merging into that of the later part with no sharp break in continuity.

Many historians now believe that the Harappa was overthrown by the Aryans. It is suggested that the interments in the later cemetery at Harappa are those of " true Vedic Aryans", and that the forts and the citadels which the vedic god indra destroyed included harappa in their number.

There is not enough evidence to say with certainty that the destroyers of the Indus cities were the members of the group related to the tribes whose priests composed the Rig Veda. But it is possible that the fall of this great civilization was an episode in the widespread migratory movements of charioteering peoples which altered the face of whole civilized world in the second Millennium BC.

Apart from the above theory of foreign invasions it is also believed that the climate change, deforestation, excessive floods, the shifting or the drying of the rivers and the overuse of the landscape might be the reasons for the end of the civilization.
Previously asked questions

1) The ancient civilization in Indian Subcontinent differed from those of Egypt, Mesopotamia and Greece in that its culture and traditions have been preserved without break to the present day. comment. (Mains 2015)

2) To what extent has the urban planning and culture of the Indus valley civilization provided inputs to the present day urbanisation. (Mains 2014)

3) With reference to the difference between the culture of Rig Vedic Aryans and Indus Valley people, which of the following statements is/are correct ? (prelims 2017)

i) Rigvedic Aryans used the coat of mail and helmet in warfare whereas the people of Indus valley civilization didnot leave any evidence of using them.

iii) Rigvedic Aryans had domesticated the horse whereas there is no evidence of Indus valley people having been aware of this animal.