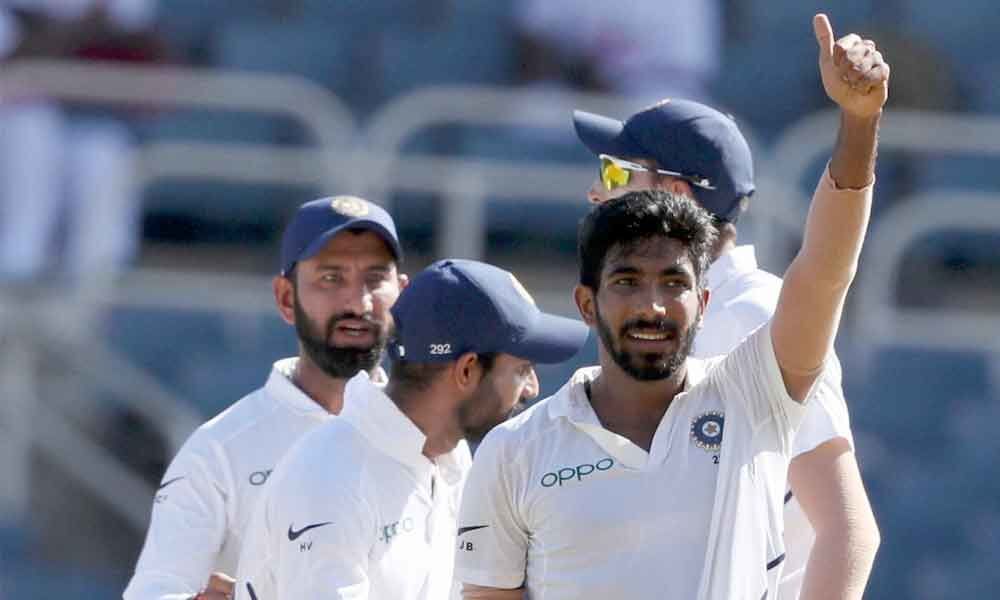 Jasprit Bumrah became the third Indian bowler to take a hat-trick in Test cricket after he dismissed Darren Bravo, Shamarh Brooks and Roston Chase off consecutive balls on Day 2 of the second Test between India and West Indies.

Kingston : Jasprit Bumrah became the third Indian bowler to take a hat-trick in Test cricket after he dismissed Darren Bravo, Shamarh Brooks and Roston Chase off consecutive balls on Day 2 of the second Test between India and West Indies.

Bumrah's historic feat came in the ninth over, he went on to take three more wickets to finish Day 2 with a six-wicket haul. Shimron Hetmyer -- who fell to Mohammed Shami -- was the only man to fall to another bowler on Saturday in Kingston as West Indies were reduced to 87/7 in reply to India's 416.

Bumrah had started the innings with the wicket of opener John Campbell in the seventh over. In his next over, he started with a wide outswinger that Bravo left alone.

The next was a length delivery that was pitched on middle stump swinging away. Bravo was forced to play and got a high edge that flew to K.L. Rahul at second slip, who did well to take the low catch.

Shamarh Brooks was then caught dead in front of the stumps with an inswinger. Brooks reviewed the decision but replays only confirmed that the ball will be hitting the wicket if it wasn't for his front pad.

Chase then took a full swinger low on his pads. The umpire turned down the LBW appeal from the Indian players but captain Virat Kohli went for the review.

Interestingly, none of his teammates were too enthusiastic about taking the decision upstairs but replays showed that Kohli was right in going for it.

The ball was hitting leg stump and the umpire had to reverse his decision.

This is only the 44th instance of a bowler taking a hat-trick in the history of Test cricket and the third time that an Indian has done so.

Harbhajan Singh did so in the historic Eden Gardens Test between India and Australia in 2001 when he got Ricky Ponting, Adam Gilchrist and Shane Warne off consecutive deliveries.

Irfan Pathan then dismissed Salman Butt, Younis Khan and Mohammad Yousuf in the third Test of India's 2005/06 tour of Pakistan in Karachi.