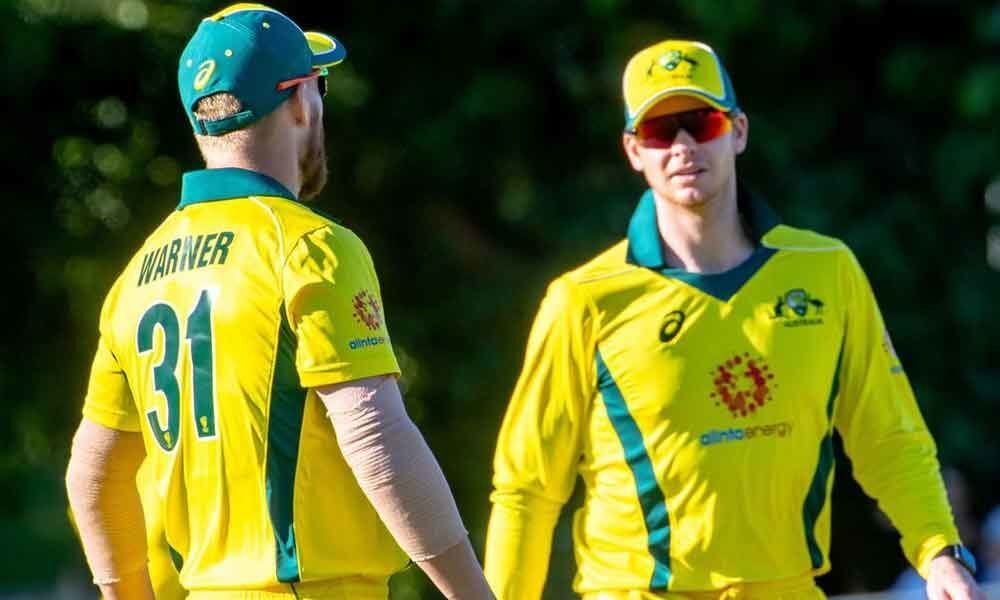 Warner compiled a measured, unbeaten 89 and shared a 96-run opening stand with Finch on Saturday to earn player of the match honours.

Bristol: Facing the booing and jeering together, Steve Smith and David Warner returned from international cricket exile to help Australia begin its World Cup defence with a dominating win over Afghanistan.

Warner compiled a measured, unbeaten 89 and shared a 96-run opening stand with skipper Aaron Finch on Saturday to earn player of the match honours.

Smith took a diving catch, produced a brilliant run out, and combined with Warner in a 49-run stand before he was out three runs shy of the victory target at the County Cricket Ground.

"It was a great win, a good start," Warner said in a post-match TV interview, admitting "there were a few nerves" getting back into the swing of things.

"But I soon relaxed when Finchy got going. There's a great buzz and energy about this team at present, we've got one on the board and we move on."

Finch, who hit six boundaries and four sixes in his 49-ball 66, commended the relatively cautious approach from Warner.

"It was a very important innings. He was struggling with his timing early but he kept hanging in there," Finch said. "That was great for him to kick on and do really well for us."

Warner didn't react to the reception from the crowd, but his teammates Marcus Stoinis and Adam Zampa said the Australians were prepared for it.

"Call it what you want, disrespectful, or just a part of the game," Zampa said. "Either way, the way that we as players are handling it has been great."

As expected, the tournament opener for both teams was a mismatch, although Afghanistan kept it interesting by recovering to post 207 after losing both opening batsmen for ducks. Glenn Maxwell needed one shot after Smith's dismissal - a boundary - to lift Australia to 209-3 and a seven-wicket win with 15 overs to spare.

For five-time champion Australia, it presented a chance to raise the stakes in the reintegration of Smith and Warner following their 12-month bans imposed in the wake of a ball-tampering scandal in South Africa last year.

The veteran batsmen played in unofficial practice games but this was the first legitimate outing and it almost went to script.

Warner's scoring rate was also uncharacteristically restrained in the partnership with Finch, and it took 74 balls to reach 50.

His raised bat to acknowledge the half-century milestone after a cutting a boundary behind point was met with a chorus of boos. He responded only by raising his bat in another direction.

The booing and jeering got louder for the arrival of Smith in the 25th over after Usman Khawaja (15) was adjudged lbw to Rashid Khan, and it rarely settled down before the former captain was out for 18.

Smith and Warner have acknowledged it will take time to rebuild their reputations following the cheating saga that started when TV cameras caught Cameron Bancroft trying to rough up the leather ball with sandpaper during a test match in Cape Town. Warner was involved in planning the clumsy plot, and Smith took the blame for not doing enough to stop it. Both accepted the heavy sanctions imposed by Cricket Australia, hoping it would give them a chance to represent their country again.

That achieved, time to reset the goals. After extending their winning streak to nine in ODIs, the Australians next face the West Indies, who opened with a comprehensive win over Pakistan. Afghanistan will travel to Cardiff aiming to pick off a demoralized Sri Lanka team which lost to New Zealand by 10 wickets.

Afghanistan's innings lasted 38 overs after winning the toss and batting against Australia, but it could have been worse.

Mitchell Starc bowled Mohammad Shahzad on the third ball. And when Pat Cummins had Hazratullah Zazai caught behind in the second over, the total was 5-2.

The Afghans rallied around two face-saving partnerships, but clusters of wickets were costly on a ground where the short boundaries offer big scores.

Rahmat Shah (43) and Hashmatullah Shahidi (18) put on 51 for the third wicket until legspinner Zampa took a pair of wickets. Najibullah Zadran (51) and Naib (31) joined forces at 77-5 and upped the tempo in an 83-run stand, belting Zampa out of the attack by clouting two boundaries and two sixes off the last four balls of the 29th over.

Again, though, Afghanistan's comeback was derailed when Marcus Stoinis (2-37) claimed Naib and Najibullah caught behind.

Zampa (3-60) returned to collect the third wicket and Cummins (3-40) took the last two to finish off.

"Definitely, we can play against these kind of teams, so you should take positive things from them," Naib said, reflecting on Australia's clinical pressure.

Naib did note that his team won something in Bristol - the support of the crowd.

He said he respected how Smith and Warner handled being treated as villains by the mainly English crowd.

"If you focus to the crowd, then you didn't focus on your game," he said. "Credit goes to them. They ignored the crowd."