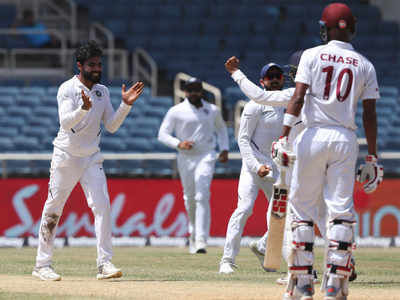 Team India registered a comprehensive victory in the second Test against West Indies to take the two match series 2-0. Mohammed Shami and Ravindra...

Team India registered a comprehensive victory in the second Test against West Indies to take the two match series 2-0. Mohammed Shami and Ravindra Jadeja stood out with the ball and took three wickets as the visitors bowled Windies out for 210 to topple them by a whopping margin of 257 runs. The win came as India's first series victory in the World Test Championship.

Beginning the fourth morning at 45-2, West Indies were dealt with an early blow when Darren Bravo walked off the field owing to a concussion. The left-hander was struck on his helmet by a bouncer from Jasprit Bumrah on day 3. With a medical examination confirming a concussion, match referee David Boon approved Windies' request to bring in Jermaine Blackwood as a concussion substitute.

At 97, West Indies lost Roston Chase, who was trapped in front of the stumps by Ravindra Jadeja. Shimron Hetmyer too soon followed suit and fell prey to Ishant Sharma after scoring just one run. Substituting for Bravo, Blackwood walked to the crease at the fall of the fourth wicket and stitched a 61-run stand with Shamarh Brooks. After making a promising 38, he was sent back to the pavilion by a gem of a delivery from Jasprit Bumrah.

Brooks, on the other hand, had continued to frustrate the Indians and notched up his maiden Test half century. A brilliant piece of fielding from the Indian skipper though inflicted a terrific run-out to cut short the 30-year-old's innings at 50. Debutants Jahmar Hamilton and Rakheem Cornwall couldn't trouble the scorers and surrendered their wickets within a span of one over as Windies crumbled to 180-8.

A late onslaught from West Indies skipper Jason Holder saw a flurry of boundaries to entertain the local supporters for a brief period. The Indians though didn't allow the formalities to get delayed as Mohammed Shami dismissed Kemar Roach before Ravindra Jadeja cleaned up Holder.

The win saw Virat Kohli lead India to clean sweeps in all formats on the Carribean tour, thereby scripting one of his most successful overseas tours as a captain. The Indian skipper has also become the country's most successful Test captain with 28 wins under his belt now.