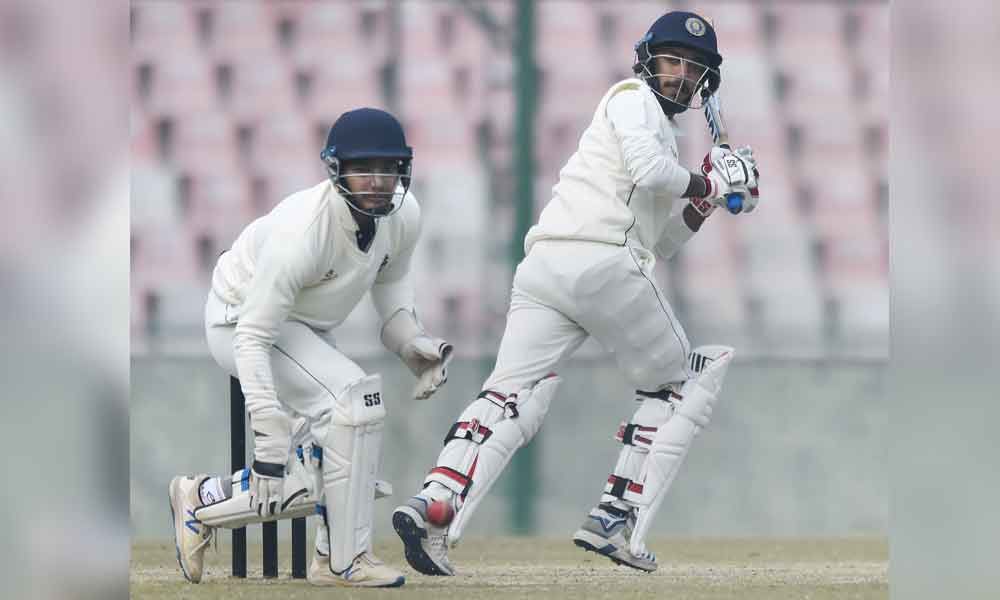 Mumbai collapsed to a 10-wicket loss to Railways on Friday in an early season shock at the ongoing third round of the Ranji Trophy.

New Delhi : Mumbai collapsed to a 10-wicket loss to Railways on Friday in an early season shock at the ongoing third round of the Ranji Trophy.

This is the first time ever that Mumbai are losing a Ranji Trophy match by this margin and just the second time in First Class cricket, having lost a 2000/01 Irani Trophy match to Rest of India by 10 wickets.

Railways only needed to chase down 47 runs to win which they did without losing a wicket after dismissing a Mumbai batting lineup consisting of Prithvi Shaw and Indian Test vice-captain Ajinkya Rahane among others for 198 in their second innings.

They were all out for 114 in the first innings after which Railways posted 266 with captain Karn Sharma scoring a century.

Meanwhile, Ishant Sharma picked up a second four-wicket-haul in Delhi's match against Hyderabad to take his side closer to victory.

Hyderabad were all out for 298, following on from their first innings total of 69 in reply to Delhi's 284. Delhi now need 60 runs to win with openers Kunal Chandela and Shikhar Dhawan at the crease.

Gujarat beat Kerala by 10 wickets with Axar Patel taking four wickets in addition to his first innings tally of three. Sanju Samson kept Kerala afloat with 78 but they eventually fell for 177.

Himachal's Rishi Dhawan took three wickets, including that of Mayank Agarwal to reduce Karnataka to 55/3 but Karun, who was the standout in the first innings with a gritty 81, and Padikkal took them to 191 at stumps. Karnataka lead Himachal by 77 runs.

Punjab are 132/0 in their first innings against Vidarbha and trail by 132 runs. Shubman Gill will start on Saturday with an overnight total of 70 while his opening partner Sanvir Singh is on 56.

Services beat Tripura by 8 wickets. Tamil Nadu trail Madhya Pradesh by 7 runs with Kaushik Gandhi and Baba Aparajit taking them to 177 at stumps.

Saurashtra were 331 at the end of the day's play in reply to Uttar Pradesh's 523 in what is turing out to be a high scoring game in Rajkot. Maharashtra led Chhattisgarh by 42 runs with their score being 39/1 at stumps.

Jharkhand were 194/2 against Haryana and trail them by 177 runs. Andhra trail Bengal by 177 runs while Uttarakhand trail Odisha by 82 runs. Maharashtra lead Chattisgarh by 42 runs and Assam trail Jammu Kashmir by 438 runs.