World champ Sindhu returns to hero's welcome, says feeling yet to sink in 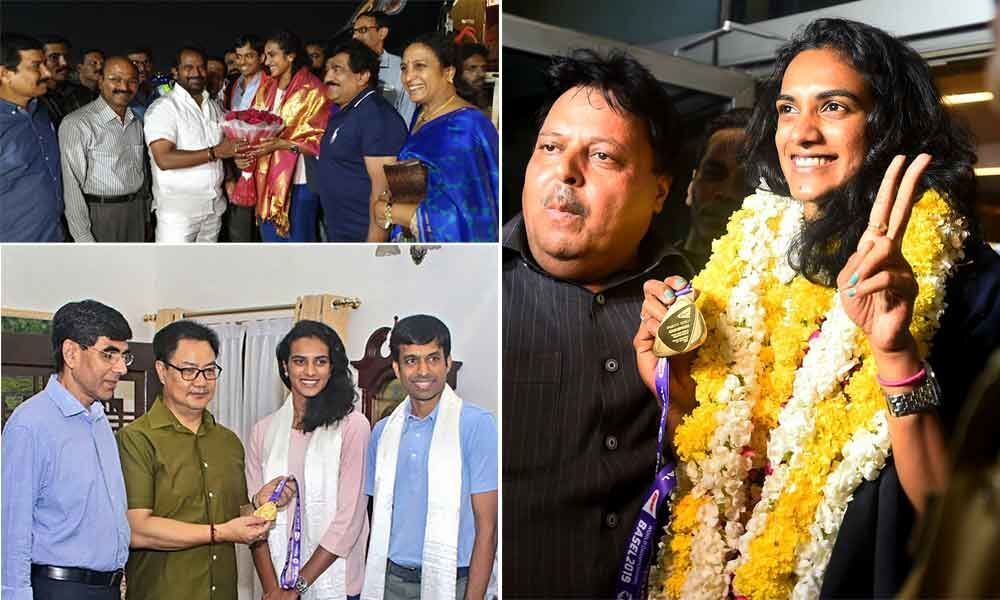 The feeling has not yet sunk in, said India’s first badminton world champion P V Sindhu on Tuesday after she was given an exuberant welcome on her return to the country which included a meeting with Prime Minister Narendra Modi.

New Delhi : The feeling has not yet sunk in, said India's first badminton world champion P V Sindhu on Tuesday after she was given an exuberant welcome on her return to the country which included a meeting with Prime Minister Narendra Modi.

The 2016 Olympic silver-medallist, who out-played Japan's Nozomi Okuhara 21-7 21-7 in a lop-sided final of the big event in Basel, Switzerland on Sunday, was mobbed at the airport after she touched down with national coach Pullela Gopichand by her side on Monday night here.

"I am really happy, I am very proud of my country. It's a much-awaited win and I am very happy about it," she said in response to a barrage of questions that were thrown at her once she came out of the airport.

Within a few hours of that, the 24-year-old had breakfast with sports minister Kiren Rijjiju followed by a meeting with Modi. The Prime Minister posted pictures of the meeting on his personal Twitter page and described the affable player as "India's pride".

Rijiju, on the other hand, felicitated her with a cash award of Rs 10 lakh. "It hasn't yet sunk in and we didn't get much time to celebrate because I had to come back early after the match and then next day take a flight back to India," she said.

The Hyderabadi, who has had little time to reflect since her historic achievement, headed to her hometown in the afternoon.

"I will work more hard and win many more medals," she promised when asked about her plans from now given that the Olympics is less than a year away and she is faced with expectations to finish on the podium for a second successive edition.

Sindhu was also asked about the moment she got emotional after the medal distribution ceremony in Basel. The five-time world medallist had tears in her eyes when the national anthem played. She had claimed silvers in the past two editions, besides a couple of bronze medals earlier.

"I had tears and there were a lot of emotions, it was a great moment for me. Thanks to all my fans for your blessings, your blessings have brought me here," she said.

"I can't express how it felt on the podium. It gave me a lot of confidence to improve and win many more tournaments. I would like to thank my coaches Gopi sir and Kim (Ji Hyun). They have put in a lot of effort and done a few changes in my game," she added.

Kim Ji Hyun, a former international from South Korea, joined the coaching staff earlier this year on Gopichand's recommendation. Sindhu also thanked the government agencies and the Badminton Association of India (BAI) for their support.