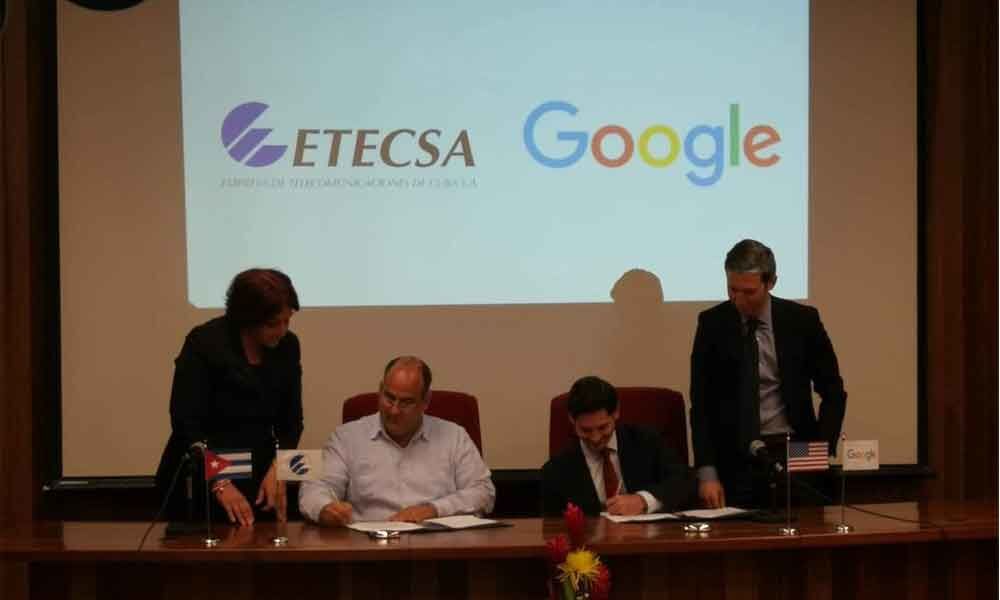 Alphabet Inc’s Google signed a deal with Cuban telecoms monopoly ETECSA on Thursday to work toward improving internet traffic exchange between their two networks and connectivity on the Communist-run island.

Alphabet Inc's Google signed a deal with Cuban telecoms monopoly ETECSA on Thursday to work toward improving internet traffic exchange between their two networks and connectivity on the Communist-run island.

Google and ETECSA signed a memorandum of understanding to begin the negotiation of a so-called "peering agreement" that would create a cost-free and direct connection between their two networks.

This would enable faster access to content hosted on the tech giant's servers, in a country where information is tightly controlled, and reduce costs for Cuba which would no longer have to pay for an intermediary.

"The implementation of this internet traffic exchange service is part of the strategy of ETECSA for the development and computerization of the country," Google and ETECSA said in a joint news release, read out at a news conference in Havana.

The peering would be implemented "when technical conditions allow it," they said. That means the establishment of a physical connection between Cuba's network and a Google "point of presence", the closest ones being in South Florida, Mexico and Colombia.

The agreement creates a joint working group of engineers to figure out how to implement this.

U.S. officials have in the past advocated for connecting Cuba via fibre-optic cable with the United States just 90 miles (145 km) across the Florida Straits.

Cuba is currently connected to the internet via a fibre-optic cable from leftist ally Venezuela that went live in 2013, while much of its web infrastructure on the island is Chinese. Earlier this week, Cuba and Russia signed a memorandum of understanding on increasing cooperation in telecommunications.

Google has been working to expand its business in Cuba for years although analysts say it will have to work hard to gain the government's trust.

Cuban-U.S. relations have nosedived since Republican Donald Trump became U.S. President promising to roll back a detente agreed by his Democratic predecessor Barack Obama and tightening once more a decades-old U.S. trade embargo on the island.

Still, the administration has maintained a loophole created by Obama for U.S. telecommunications companies to provide certain services to Cuba as they would open up the country further.

"The signing of this memorandum evidences that the interest of U.S companies in developing businesses with ETECSA remains," the Google, ETECSA news release read.

Google set up a small pilot display center in Havana and signed a deal in 2016 granting internet users quicker access to its branded content.

Google's attempts to enter the Cuban market come as it faces blowback from employees and human rights activists over attempts to expand in another Communist-run state, China, amid concerns it could comply with that country's internet censorship and surveillance policies.

Google has said it has not committed to any policies as it explores offering more services in China.

Whether due to the U.S. embargo, lack of cash or concerns over the free flow of information, the internet was largely available to the public in Cuba only at tourist hotels until 2013.