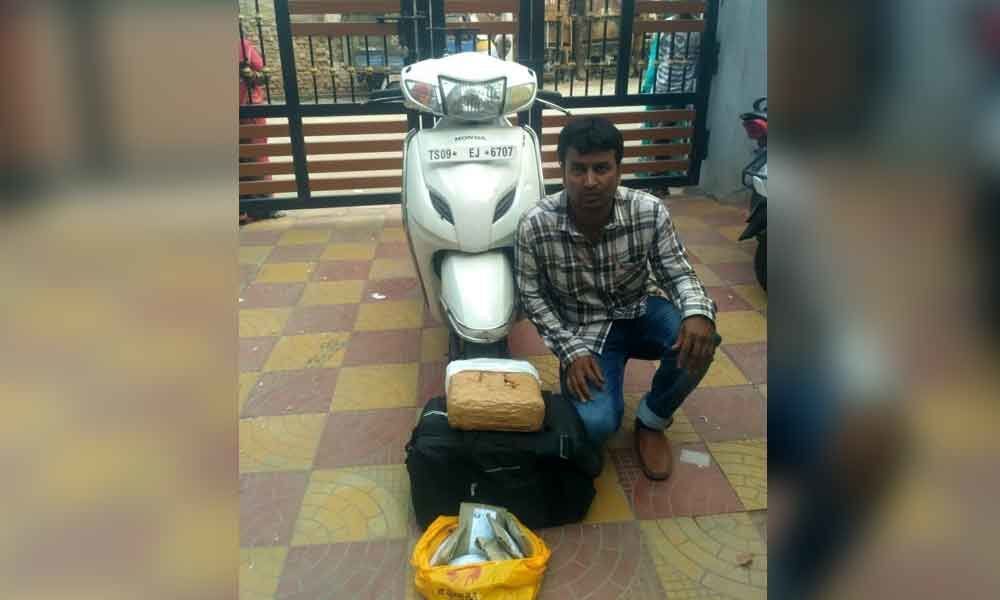 Hyderabad: The Hyderabad Excise Enforcement officials on Friday nabbed two persons including main supplier of ganja. The officials seized 13 kg ganja, a bike and two mobiles in two separate cases from the possession of the accused.

According to N Anji Reddy, Assistant Prohibition and Excise Superintendent, Enforcement, on credible information the Excise Enforcement conducted route watch near Jaffer Hotel on Jirra and Dhoolpet road and found 11 kg dry ganja from five bundles in the possession of one Syed Saleem (40), a resident of SR Nagar.

The officials seized the contraband, a bike and a mobile phone from him. Efforts are on to nab the other absconding accused identified as Sunil Singh. The accused was earlier jailed in a domestic violence case.

During his jail term he got acquainted with Sunil Singh, who was a drug offender involved in the ganja business. As the accused incurred huge losses in lorry transportation business he met with Sunil Singh and started ganja selling business for money.

In another case, woman ganja smuggler identified Aruna Bai (44) was arrested at Rahimpura for selling dry ganja. The police seized 2 kg ganja and a mobile phone from her possession.

She started wholesale ganja selling to local ganja sellers for high margins. She is a wanted in three more ganja sale cases.

The accused and the seized material were handed over to the SHO, Dhoolpet Excise station for further action.