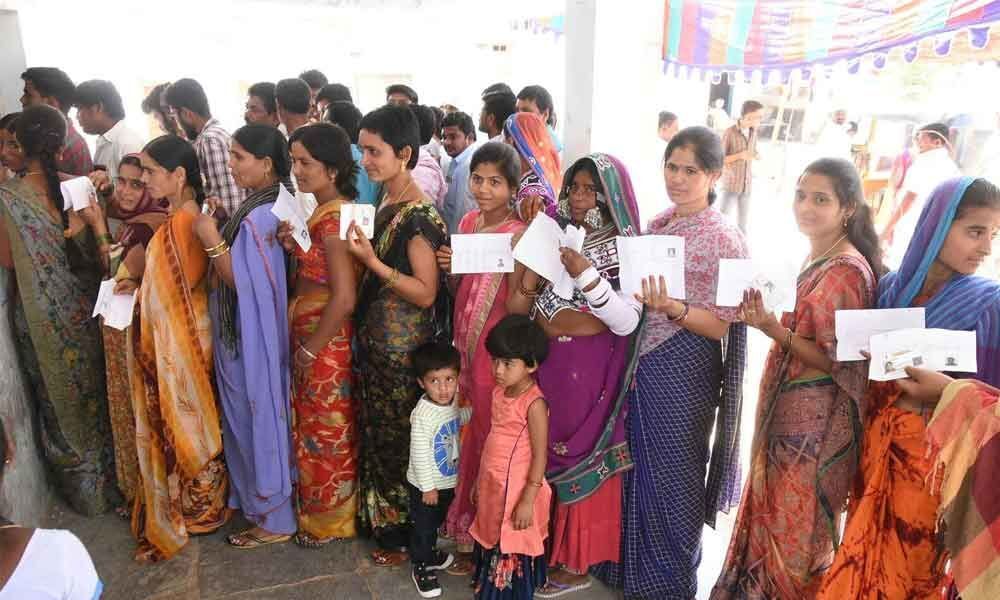 According to tentative reports, the voting percentage was said to be nearly 80 per cent in 2096 MPTC and 195 ZPTC segments.

Undeterred by the scorching heat in the peak summer, voters thronged the polling booths to cast their vote.

In some places, mainly Khammam and Nalgonda districts, where the day temperatures had registered high for the past three days, voter turnout was thin during morning hours.

But after 3 pm, people rushed to the booths and made a beeline to exercise their franchise.

In the Naxal-infested districts of old Khammam, Warangal, Adilabad, Karimnagar and Nizamabad districts, the total turnout was registered 70 per cent.

The State Election Commission authorities said the total turnout would be above 80 per cent. In Suryapet, the police overaction was visible as they stopped a voter for coming to the polling booth wearing a red shirt.

This incident happened in Barkatgudem. The voter came to exercise his franchise along with his wife. TRS leaders present there objected to the colour of the shirt and the police stopped him from joining the queue.

They insisted that he should either remove the shirt or go home, change the shirt and come again for polling. This led to heated argument with the police.

Intervention of senior officials saved the situation from turning ugly and the voter went inside the booth after removing his shirt.

Though there were no glitches like non-functioning of EVMs since polling was done by ballot papers, certain incidents like stopping of polling for about 30 minutes as the polling officers took a break for breakfast led to protests from voters.

This incident took place in Kalwa village of Dilawarpur mandal in Nirmal district. Polling was stopped in four villages in Narayanapur mandal in Yadadri Bhongir district where the symbols of the independent candidates were wrongly printed on the ballot papers.

The election authorities will take a decision on re-polling after verifying the facts.

Minor clashes were also reported in Congress stronghold areas in Nakrekal and Nalgonda Assembly segments where followers of Congress senior leaders Komatireddy Venkat Reddy and K Rajagopal Reddy clashed with local TRS leaders alleging that the TRS was resorting to rigging in polling booths in many villages.

TRS leader and Nizamabad MP K Kavitha who exercised the franchise in Navipet mandal exuded confidence that the TRS will continue the winning streak in the mandal and ZP election as well.