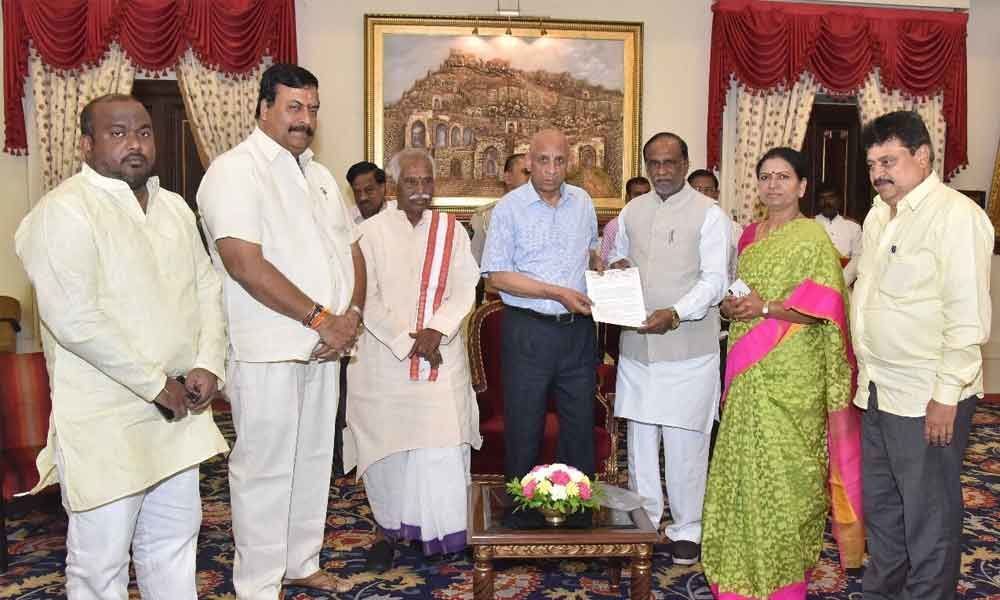 x
A delegation of Telangana BJP, led by its State president K Laxman, submitting a memorandum to the Governor E S L Narasimhan in Hyderabad on Thursday
Highlights

Hyderabad: A delegation of Telangana BJP, led by its State president K Laxman, met Governor E S L Narasimhan on Thursday and reiterated their demand for dismissal of the Education Minister G Jagadish Reddy and Telangana State Intermediate Board (TSBIE) Secretary A Ashok.

Waving of the fee for recounting and reverification process were measures in right direction, he said.

The entire verification process should be completed before conducting the advanced supplementary examinations.

Supplementary examinations should also be completed at the earliest. Such measures would ensure that students do not face any problem to apply for admission into degree courses and also appearing for EAMCET

He said the students were subjecting to untold hardships by the TSBIE while the other states are going ahead with conducting the EAMCET-2019 and commencing engineering admissions.

He described Board Secretary's statemen that the students had been committing suicides due to "mass hysteria" as irresponsible and added that it reflected negligence on the party of the Minister as well as Secretary.

He wondered as to why the State government was hesitating to appoint a judicial inquiry to probe the entire process of the irregularities in the Inter marks fiasco.

Laxman said until its demands were met, and justice was delivered to the

Students, the BJP would continue to fight on behalf of the students and also decided to further intensify its agitation.

He said that the Governor has responded positively to the issues highlighted and told that it was unfortunate to see that the State was witnessing students committing suicides.