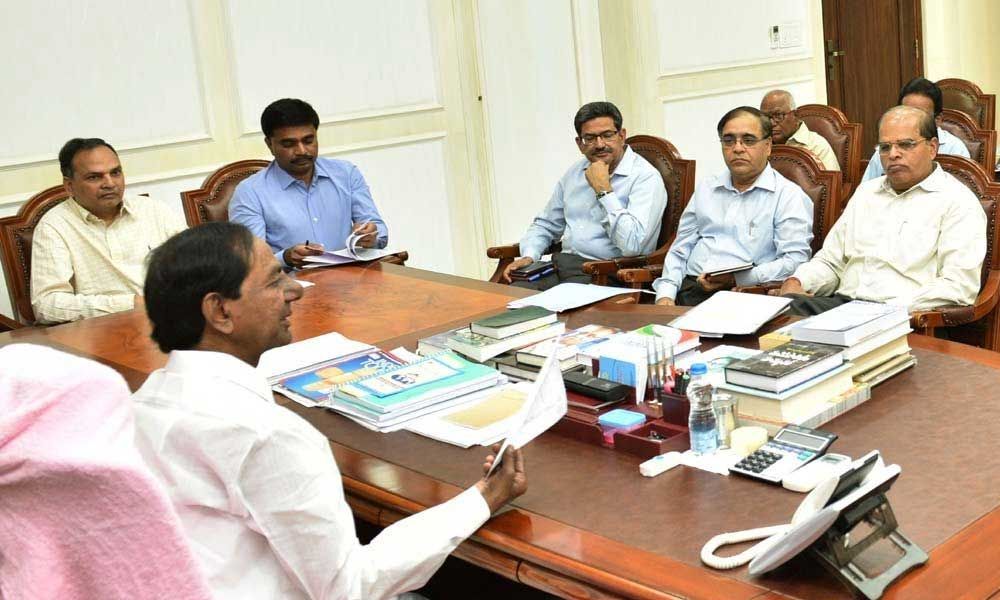 As part of the visit, the CM KCR inspected the ongoing works through an aerial view and reviewed the progress of works with the officials, engineers and work agencies concerned. KCR said that since Karivena reservoir plays a major role under Palamur Ranga Reddy Lift Irrigation Project, works pertaining to the reservoir should be completed on a war footing and directed the Engineers and work agencies to act accordingly. The CM said that the existing works need to be taken up uninterruptedly in three shifts per day and the construction should be completed at the earliest.

He said required bills would be cleared on the same day and one need not worry regarding the delay of the payment. The CM also pointed out that, "There is a need to increase the workforce and those working in shifts. "Official machinery will always be there for any support. Keep four and half-month period as the target before the summer begins and all works have to be completed before the advent of the monsoon. By this time, farmers should get water into their fields".

The CM further said, "You have no major issues and there is no need to look into issues like land procurement. The Kaleswaram project works are almost completed. There are a few finishing touches required and all major works are over, all our attention should be focussed on the Palamur Rangareddy Lift Irrigation Project. There is a need to increase the existing machinery.

For completing the works at rapid speed incentives will be announced. If you are unable to complete works on the specified time, bring it to our notice. Don't allow anything to cause hindrance to the desired targets. By next monsoon, works should be completed and we must be able to give water for farmers. Efforts have to be made towards this endeavour'. After discussing other related issues, CM KCR has given directions to MLAs, officials, work agencies and later, he left for Vattem project by the helicopter.

After conducting an aerial view, while discussing with the officials concerned, CM KCR desired that, since the reservoir is being built with 16.7 TMCs capacity, within a week's time all the three agencies should take up reservoir construction works in three shifts and complete. If need be, they are permitted to recruit required manpower for the same. The CM also desired that the revetment works need to be completed before March 2020. Further, the CM wanted the reservoir and pump house works should be taken up and completed simultaneously.

The Collector has brought to the notice of CM KCR that for the purpose of land acquisition and R&R there is a need for funds to the tune of Rs.200 Crore. The CM immediately directed CMO Secretary Smitha Sabharwal to release the funds. Before reaching Vattem reservoir, soon after landing from the helicopter, the CM KCR met local villagers and received letters and representations from them. The villagers requested the immediate release of funds for the land acquisition and special funds for the development of the village. The CM assured the villagers that they would be taken care of in all aspects.