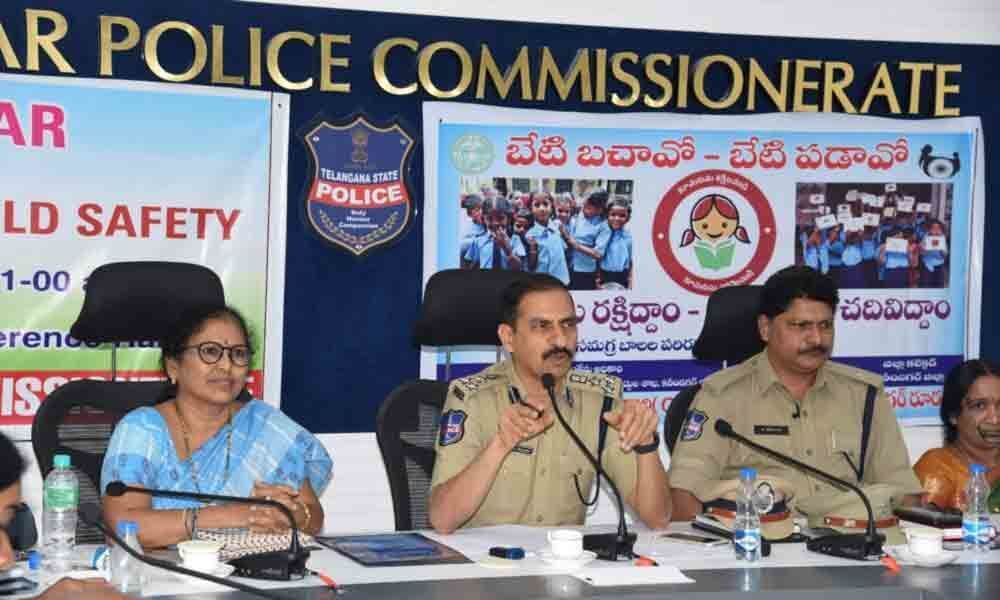 Commissioner of Police VB Kamalasan Reddy speaking at a seminar on ‘Women and Child Safety’, at the Police Commissionerate in Karimnagar on Thursday
Highlights

Women and girl students should not tolerate any kind of abuse and harassment and must inform the police immediately without fear, suggested...

Karimnagar: Women and girl students should not tolerate any kind of abuse and harassment and must inform the police immediately without fear, suggested Commissioner of Police VB Kamalasan Reddy, at a seminar organised on women and child safety at the Police Commissionerate in Karimnagar on Thursday.

Speaking on the occasion, the Police Commissioner said that they cannot nab and punish the criminals, who resort to crimes on women and girls, if such incidents were not reported to the police. Not only that, there is a possibility of happening such incidents again and again, he cautioned.

Parents and guardians must not leave their daughters alone in the house when they are going out and must inform the police immediately if they find suspicious persons roaming in their colonies, he suggested.

Kamalasan Reddy suggested the parents to provide training to their children in self-defence. About 10,000 girls were given training in self-defence till date. 50 per cent of incidents of harassment and crime are related to dowry cases. The police department is taking all necessary steps for preventing such incidents along with providing safety to women and girl students, he stated.

'As part of that, the police department established SHE Teams, which are working efficiently. As many as 1,501 eve-teasers were apprehended, who are teasing the girl students and women, till date and gave counselling to them and to their parents. Even cases were also filed against them depending on the seriousness of the case,' the Police Commissioner added.

The Commissioner suggested working women and girl students and other people to download Hawk-Eye app through which they can lodge complaints without coming to police station and also to utilise the services of Dial 100. He informed that the police department will organise several awareness programmes on women and girl safety in the coming days in schools and colleges.

DGP clarifies on Chandrababu's security, says he has highest security in the country