Frightened villagers run for life as cheetah goes on a rampage 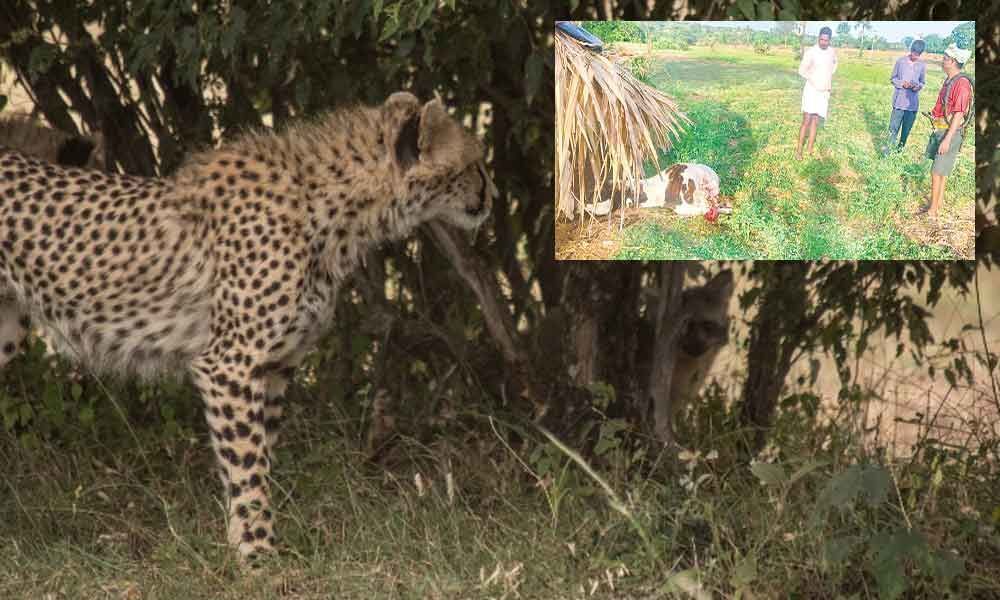 In spite of rising incidents of wild attacks by Cheetah against the cattle and other livestock in Ekwaipally village of Kadthal mandal in Ragareddy district, the Forest officials still remain mere spectators.

Kadthal: In spite of rising incidents of wild attacks by Cheetah against the cattle and other livestock in Ekwaipally village of Kadthal mandal in Rangareddy district, the Forest officials still remain mere spectators.

Earlier a few weeks ago, the wild cat had devoured a cow calf of Yedla Yadaiah and killed it. And now once again it has attacked a Calf of a farmer Jengala Mallaiah in his farm land on Saturday.

According to the villagers of Ekwaipally, during the past 2-3 months the wild cat had killed more than 300 domestic animals like Sheep, Goats, Cow Calves and buffalos. Even though the villagers had lodged their complaints with the forest officials no action has been taken yet and still the killer wild cat is roaming loose, causing fear among the villagers.

"The Cheetah has been roaming in the surrounding hilly areas since past 3-4 months. We have earlier spotted it many times and also informed to the forest officials, but till now no action has been taken up. As many as 40 calves have been killed by the wild cat since past 3 months.

We are demanding the forest officials to take action and capture the wild animal and protect us and our animals," said Mallaiah.

The forest officials who are already aware of this, are also helpless as they have attempted many times to capture it but failed. "We are not able to spot the exact location and area of the wild cat. This is roaming from one habitat to the other, though we tried to capture it, it is not falling to our baits," informed a forest officials.

Not just in Ekwaipally, similar incidents of Cheetah attack are also witnessed in Ippalapally village of Nagarkurnool district. "A Cheetah is on the prowl in Ippalapally village, we have already lost a buffalo and we under fear that the Cheetah may also attack humans and we are not coming out of our homes during nights.

We are seeking the protection of the forest department officials, however no one has come forward to assure protection from the wild life," said a resident of Ippalapallly.

However, the forest department officials said that the people of the village must be alert and advised them to keep their cattle and other live stock indoors so that no such incidents repeat again.