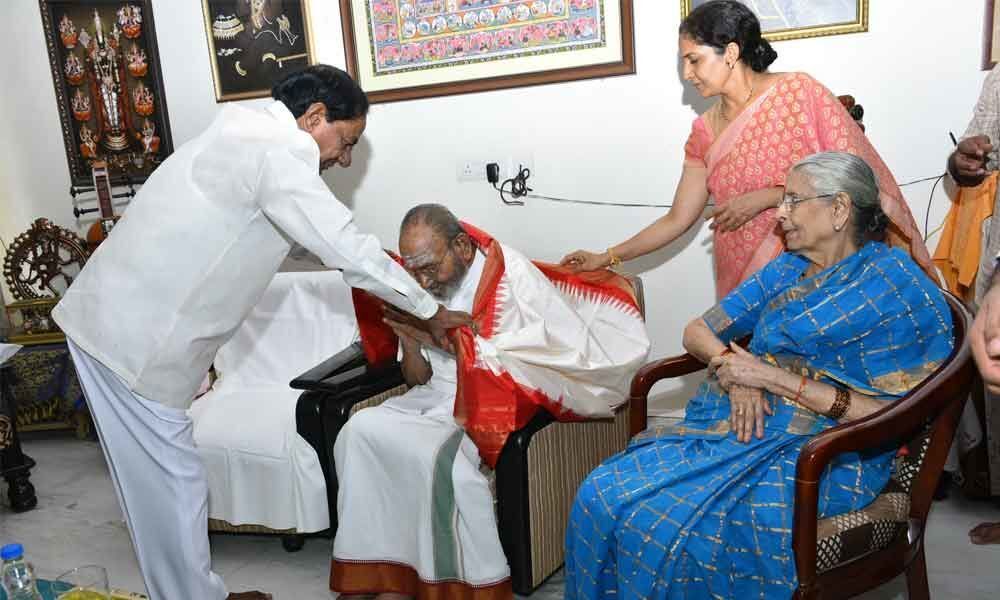 The Chief Minister revealed his desire to produce such a film during his meeting with Vishwanath here on Sunday.

The Chief Minister told Vishwanath, "I am your fan since my childhood days. I saw each and every film that you have made. I watched Shankarabharanam for about 25 times. Every time I watched your film, I felt like meeting you personally. My desire is fulfilled today."

"Nowadays, there aren't any message-oriented films being produced. You have to make a good film again. If you agree to make a film with the help of your assistants, I am ready to take care of the production part of it. Please make a plan for this," the CM persuaded with Viswanath.

KCR said the films made by Vishwanath are like poems for him. Every department, whether it is the selection of actors, dialogues, language, songs or picturization, they excel under his direction.

Vishwanath said he was very honoured and humbled as the Chief Minister himself had visited his house. "When you called me up on Saturday night and said you will be visiting my house, I thought that somebody was mimicking your voice.

But later when I found that you have spoken to me, I did not sleep till midnight.

"I have been watching your good work and your basic nature of working hard for the people I came to know through reports in newspapers on TVs.

I am personally meeting you for the first time. Once Tamil Nadu CM MGR came to my house and now you have graced my house for which I am happy," the acclaimed director told KCR. "It is like Srikrishna visiting Kuchela's house," he added.

When the CM enquired about his health, Viswanath said, "My health is fine. But I have joints pain. Doctors say that they will perform the replacement operation, but I am scared of operation.

I am scared of hospitals. Even in my films I never try to include hospital scenes. I am scared of watching blood. Then how will I undergo an operation?

I will continue and manage like this," Viswanath said. Viswanath also complimented the CM for his mastery over Telugu language and literature.

Vishwanath's wife Jayalakshmi heaped praises on the CM for constructing the Kaleshwaram project and hoped CM's aim of giving irrigation water to farmlands would be successful.

Meanwhile, Viswanath asked on how the CM was able to withstand the criticism despite the fact that he was constructing the projects with a lot of hard work.

To this, the CM replied, "These things have become habitual for me in politics. I am not bothering or worried about the baseless criticism as I am working with the aim of bettering the lives of people."

Viswanath blessed the CM and said that for all the good work undertaken for people's welfare God will have his blessings on him.