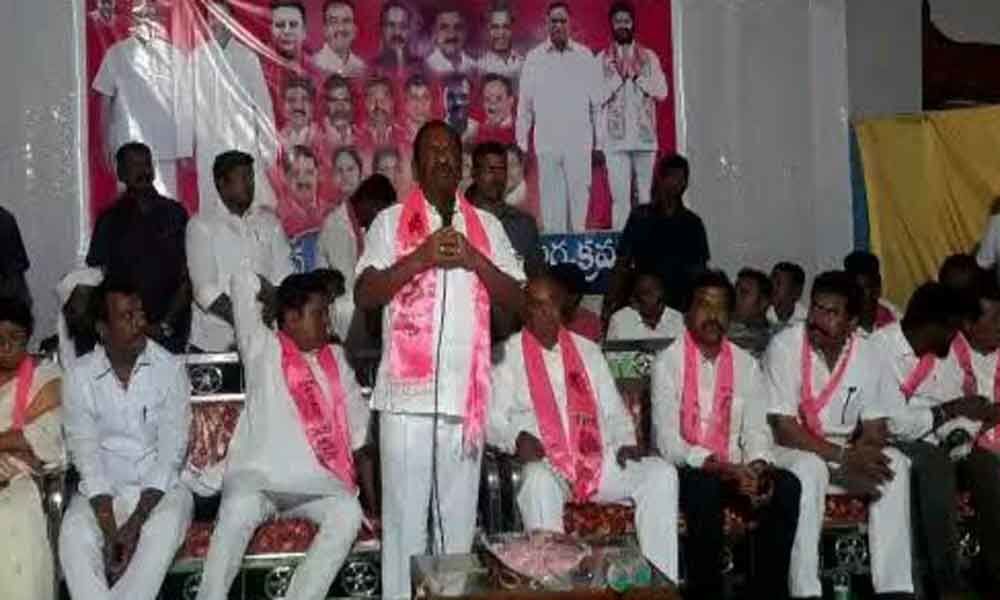 Speaking on the occasion, the Minister said that Chief Minister K Chandrashekar Rao is striving hard to lead the State towards development. The CM had introduced several innovative schemes for the welfare of all sections of people.

Peddapalli: Everyone must play active role in building a new and Bangaru Telangana, appealed Welfare Minister Koppula Eshwar. Congress senior leader Bayyapu Manjula Manohar Reddy of Ranapur mandal along with hundreds of local leaders had joined the TRS in the presence of Welfare Minister K Eshwar at a programme at a private function hall in Peddapalli on Wednesday.

Speaking on the occasion, the Minister said that Chief Minister K Chandrashekar Rao is striving hard to lead the State towards development. The CM had introduced several innovative schemes for the welfare of all sections of people.

By utilising these schemes, people must develop economically and must play an active role in building Bangaru Telangana, he appealed. Peddapalli MLA Dasari Manohar Reddy said an all-round development of various regions in the State will take place under the TRS government and it is possible by the TRS only.

After observing the enormous development that is taking place under the leadership of Chief Minister K Chandrashekar Rao, many leaders of other parties are joining the TRS, he added.

Pointing out Congress leader and Manthani MLA D Sridhar Babu, Peddapalli Zilla Parishad chairperson Putta Madhu said that people had elected the Congress leader for about eight times from Manthani constituency, but he never cared for them and never tried to solve any of their issues. He even did not give importance to his own party leaders, P Madhu alleged.

All the leaders of other parties, who had joined the TRS, will have equal importance and recognition in the party and the newly joined leaders must strive hard for strengthening the party from grassroot levels in the district, he suggested.