Poll results a slap in the face of TRS: Congress MPs-elect 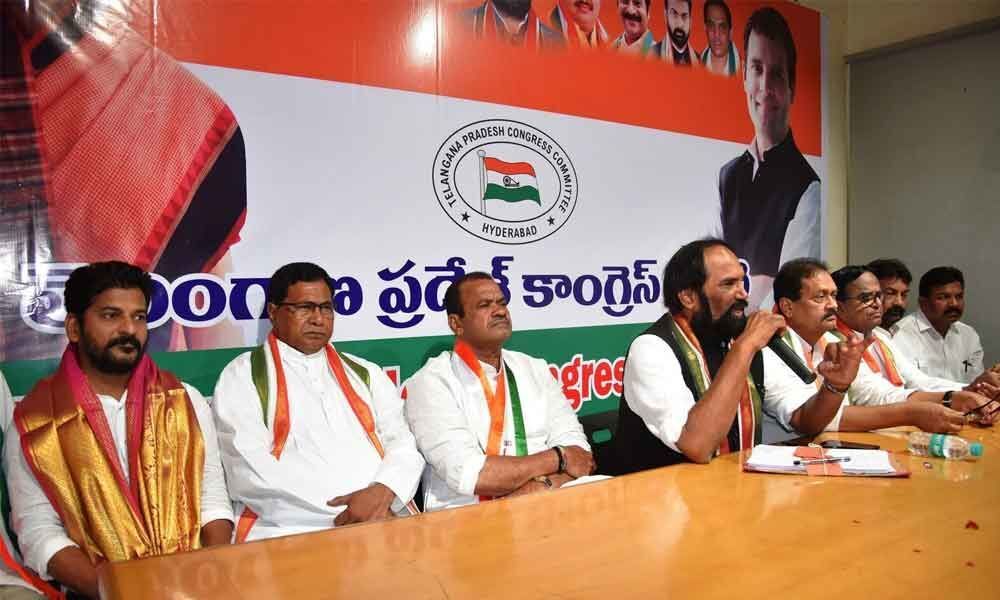 N Uttam Kumar Reddy, A Revanth Reddy and Komatireddy Venkat Reddy promise to fight for implementation of promises made in the AP Reorganisation Act for the benefit of the State

Hyderabad: The Congress MPs-elect on Tuesday said that the results of the recently concluded Parliament elections in the State are a slap in the face for the ruling Telangana Rashtra Samithi.

Addressing the media for the first time after being elected to Lok Sabha, the MPs-elect N Uttam Kumar Reddy, A Revanth Reddy and Komatireddy Venkat Reddy said the people had taught a lesson to the ruling party for not fulfilling the election promises.

Speaking on the occasion, TPCC president and MP-elect Uttam Kumar Reddy said that the TRS had boasted that it would win 16 Lok Sabha seats in the state. But the people taught a lesson to it.

He said the Congress had won three seats and lost two narrowly. The TRS leaders had ensured that liquor and money flowed freely in the elections.

The ruling party had admitted the MLAs of other parties and tried to banish the Congress from the State, they said.

Uttam Kumar Reddy made it clear that the TRS was defeated as it had failed to fulfil the promises.

The MPs-elect would fight with the Centre for implementation of promises made in the AP Reorganisation Act. They referred to the coach factory at Kazipet and steel plant at Bayyaram, besides national status to one of the irrigation projects.

He said that the MPs-elect would strive to strengthen the party. He asserted that the Congress was the only alternative to the TRS in the State. He said the BJP had won four seats out of sheer luck.

He said with deep-rooted secular feeling, the people of Telangana have voted for the TRS to defeat BJP.

Uttam Kumar Reddy appealed to All India Congress Committee president Rahul Gandhi to withdraw his resignation. He reiterated his confidence in the leadership of Rahul.

MP-elect from Nalgonda, K Venkat Reddy said though the TRS had support of 14 MPs in the previous Lok Sabha, it had failed to achieve the promises being made to the people.

They would fight for the implementation of the promises made in the APRA.

Venkat Reddy said they would get good results in the elections to the local bodies and MLC polls.

Malkajgiri MP-elect A Revanth Reddy said people of mini India, Malkajgiri Parliamentary constituency, had blessed him. He alleged that TRS leaders Harish Rao and K T Rama Rao hatched conspiracies to defeat him in the Kodangal in the Assembly polls.

He said that people of Malkajgiri had elected him to see that he fights against injustice. He made it clear that the people in the constituency had rejected the divisive politics being pursued by Narendra Modi and Amith Shah.

He denied the rumour that he would quit the Congress party as being made out on social media.

Party leader Konda Vishweshwar Reddy said he had been defeated immorally in Chevella constituency. He alleged that police had worked like agents of the TRS party. Former Minister Shabbir Ali also spoken.