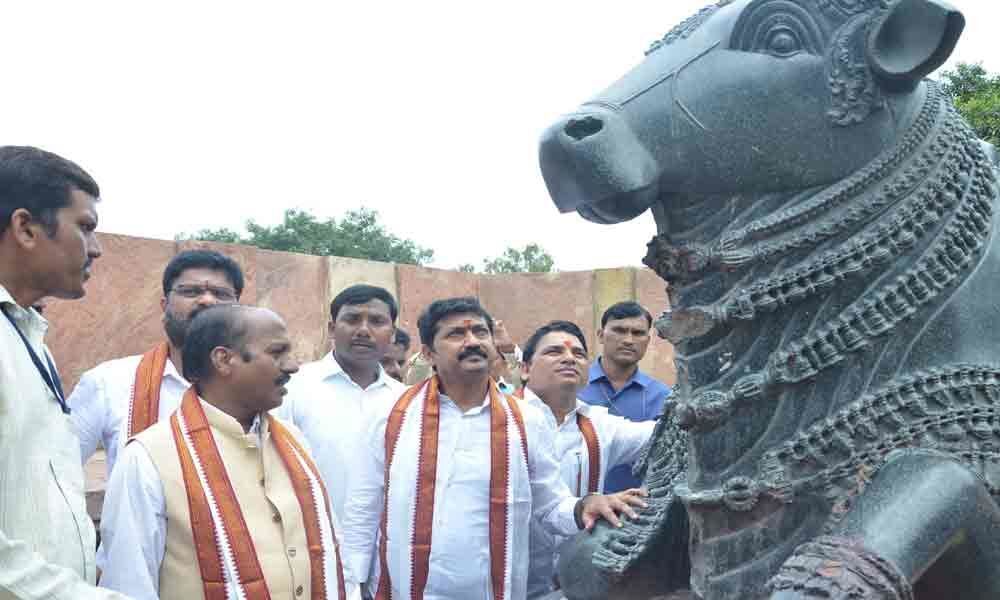 x
MLC Pochampally Srinivas Reddy and others having a look of architectural beauty of Nandishwara at Rudreshwara Temple, also known as Ramappa, in Mulugu district on Saturday
Highlights

The 800-year-old engineering marvel of Kakatiya dynasty that is aspiring to be on the coveted list of UNESCO’s World Heritage Site appears to have good days ahead.

Ramappa (Mulugu): Ramappa. the first note that strikes everyone is its architectural marvel. The 800-year-old engineering marvel of Kakatiya dynasty that is aspiring to be on the coveted list of UNESCO's World Heritage Site appears to have good days ahead.

It may be mentioned here that Ramappa went tantalisingly close to get the World Heritage Site tag last year is India's only nomination this year. To scrutinise the nomination, a team of experts from the UNESCO are set to visit Rudreshwara Temple, popularly known as Ramappa, next month.

It may be mentioned here that the temple is being protected by the Archaeological Survey of India (ASI) since 2012. However, how long it takes for the World Heritage Committee (WHC) to accredit UNESCO's tag is uncertain, the architectural marvel is assured of massive development in the near future.

Thanks to MLC Srinivas Reddy Pochampally alias Varikole who girded up his loins to develop the precincts of the temple and provide other infrastructural facilities to attract more domestic and international tourists.

Speaking to The Hans India, Pochampally who along with a team of architects visited the temple on Saturday said: "Ramappa temple that personifies glorious era of sculpture is awfully short of facilities that make it a perfect destination for the tourists.

The temple which has a massive potential to draw devotees and tourists will be given a huge fillip." A blueprint for the development of the temple will be prepared in 10 to 15 days, he said. The impetus of the plan is to construct a road from the eastern side of the temple along with an arch, besides illuminating the path.

The development plan also includes Ramappa Lake bund with central lighting on it. "The development plan will be taken to the notice of Chief Minister K Chandrashekar Rao. And a fortnight later, we have plan to bring Ministers concerned to Ramappa temple to discuss the action plan," Pochampally said.