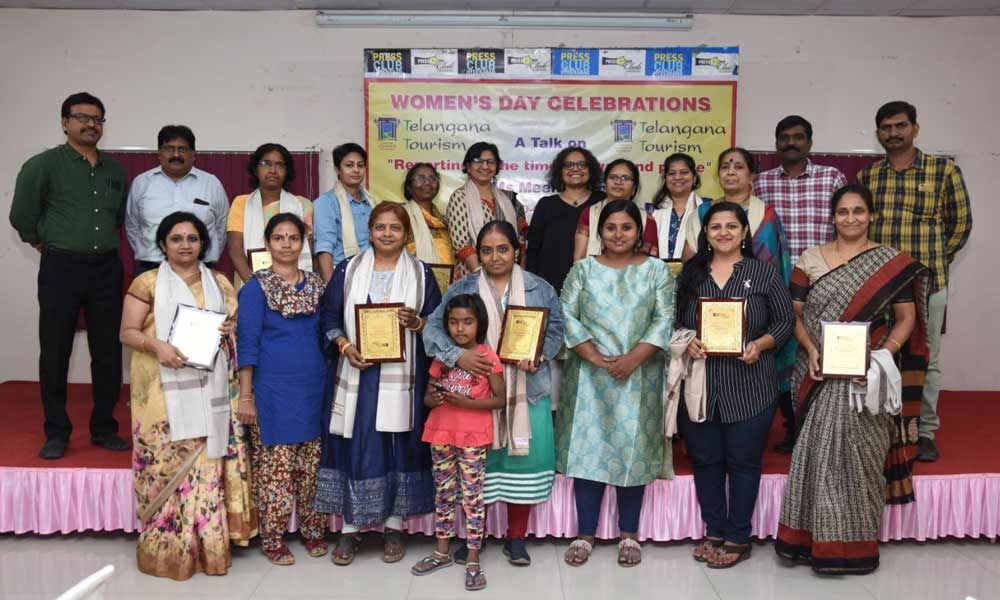 Khairatabad: On the occasion of International Women's Day, Hyderabad Press Club held celebrations on Sunday and felicitated senior women journalists on its premises in Somajiguda. Meena Menon, an eminent journalist, who in an independent journalist and former Deputy Editor of The Hindu, graced the occasion and gave away the awards. Meena was posted in Islamabad from August 2013 to May 2014, before she was expelled along with other Indian journalists. She gave a talk to the attentive audience on her experiences of reporting from Pakistan on which she also write a book 'Reporting Pakistan's

"The animosity and enmity is a State issue and political in nature. The common people of Pakistan are extremely hospitable and seeking peace. The States harbour mutual distrust. I, as an Indian journalist, always had two people following me everywhere I went," she shared. Interestingly, Meena was allowed to attend General Musharraf's court hearings and attended many press meets that the now Prime Minister of Pakistan Imran Khan held. She also covered stories of honour killings in Sindh, the state of Malyalees from Kerala struggling for livelihood, who had actually landed in the country under the assumption that it was Dubai, evidently duped by agents. While it was an interesting tenure of her career, she says she felt humiliated when she was asked to leave half-way (usually journalists would be posted for 2 -3 years) when there was no provocation. She is one of the last Indian journalists who was allowed to report from Pakistan. She had been to Hyderabad Press Club of Pakistan and coming to another press club in the same name, but this time in India is a dejavu moment for her, she says. Meena Menon, for a brief period was in Hyderabad as a student.