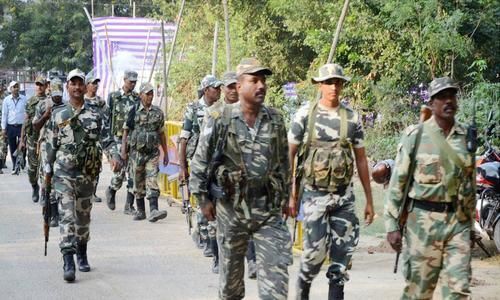 Elaborate security arrangements are being made for the smooth conduct of counting of votes for Lok Sabha elections in Telangana on May 23.

Hyderabad: Elaborate security arrangements are being made for the smooth conduct of counting of votes for Lok Sabha elections in Telangana on May 23.

According to Director General of Police (DGP) Mahender Reddy, the Elections to 17 Parliamentary Constituencies in Telangana State were conducted in 34,603 Polling stations and 18526 polling locations in a peaceful manner on 11.04.2019 in first phase of elections. After peaceful conduct of elections, the EVMs and VVPATs were stored in 123 Strong Rooms at37locations falling in (16) Police Units.

3-tier Bandobust was arranged for safeguarding strong rooms comprising of inner Cordon, Middle cordon and Outer cordon as per the guidelines of Election Commission. They were guarded by the CAPFs along with CCTV surveillance round the clock with command control centers set up for each location. Armed Reserve and local District Police force are being utilized for perimeter patrolling and watch duty to prevent the unauthorized access of anti-social elements at the strong rooms.

Access to people will be restricted in counting centre and only people authorized by R.O will be permitted inside with a valid pass. Separate place for media centre has been created. No one is permitted to carry mobiles inside counting centers. Proceedings U/s 144 Cr. P.C will be promulgated within 100 meters of the counting centers on the day of counting and violators will be prosecuted.

No victory processions are permitted without specific permission from competent authority. All political parties and candidates are requested to cooperate in the manner.