TRS is against political empowerment of Muslims: Congress 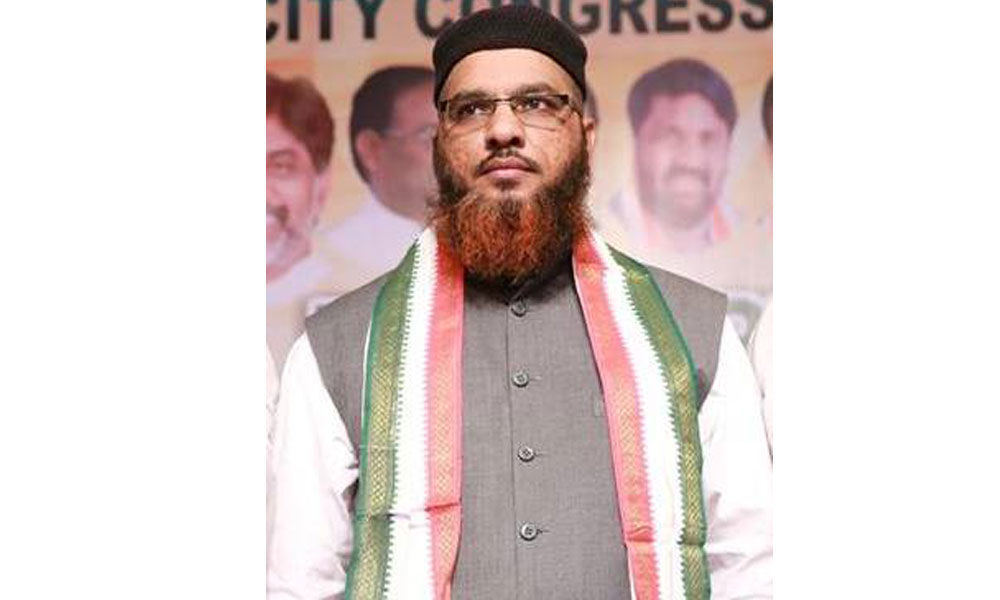 The Congress party has strongly condemned Telangana Rashtra Samithi (TRS) for not giving ticket to a single Muslim for the forthcoming Lok Sabha elections.

Hyderabad: The Congress party has strongly condemned Telangana Rashtra Samithi (TRS) for not giving ticket to a single Muslim for the forthcoming Lok Sabha elections.

Telangana Pradesh Congress Committee (TPCC) Minorities Department Chairman Shaik Abdullah Sohail, in a media statement on Monday, said that TRS, headed by Chief Minister K. Chandrashekhar Rao, was openly opposed to political empowerment of minorities, especially Muslims. For the same reason, he said TRS did not nominate a single candidate from Muslim community from any of the 17 Lok Sabha constituencies in Telangana State. "Denial of party ticket to any Muslim in these crucial elections clearly show what TRS stands for. KCR does not want Muslims to get elected to law making bodies and for the same reason he has been denying tickets to Muslims since beginning," he alleged.

Sohail pointed out that KCR had given tickets to only two Muslims in Assembly elections held in December 2018. Of them, one got re-elected (Shakeel from Bodhan) while the other one (Inayat Ali Baqri) was not even allowed to campaign in his constituency (Bahadurpura). Compared to TRS, Congress party gave tickets to seven Muslim candidates, including two tickets outside Hyderabad (Kamareddy and Nizamabad Urban). "It is the ideology of RSS to keep Muslims away from the law making bodies. Therefore, the BJP always ensured that Muslim candidates are either denied tickets or nominated from seats which they cannot win. Being a follower of RSS ideology and supporter of BJP policy, KCR too ensured that Muslims are denied entry into legislative Assembly and Parliament," he said.

The Congress leader said that by not giving ticket to any person from the minority community, KCR has sent a wrong message that Muslim leaders are not capable of winning elections. "KCR has always discouraged Muslims from contesting elections and instead, lured them to get nominated posts than securing elected posts. This is a big conspiracy against the community which would hurt the Muslims in the long run. Muslim community must realise that KCR only wants their votes but not willing to empower them politically," he said.

Sohail alleged that KCR has been trying to create a false narrative that minorities in Telangana were happy and satisfied with State and Central Government's schemes. He said that the State Government did not spend even 50% of the funds allocated for minorities' welfare. Hundreds of minority institutions have been closed in the last five years and lakhs of students were forced to discontinue their higher education due to non-payment of fee-reimbursement dues or scholarships. No institution under the Minorities Welfare Department is fully functional and all of them are facing huge shortage of staff. Similarly, funds for various Central schemes for minority welfare have been reduced year by year and most of the schemes, which were introduced by the previous Congress-led UPA regime, have been discontinued. "TRS MPs never raised these issues in the Parliament and instead, supported the Modi Government in all its moves," he said.

Sohail reiterated that TRS was the B-Team of BJP which is trying to win the Lok Sabha elections using a fake mask of secularism. He predicted that KCR would be the first person to support BJP if it needed some MPs to form the government. However, he said such a scenario might not occur as Congress was all set to win the forthcoming Lok Sabha elections and AICC President Rahul Gandhi would become country's next Prime Minister. Stating that voting for TRS would be like voting for BJP, he urged people to vote in favour of Congress candidates to protect secularism and democracy in the country.