TRS is 'Inti Party' owned by every person in Telangana: KTR 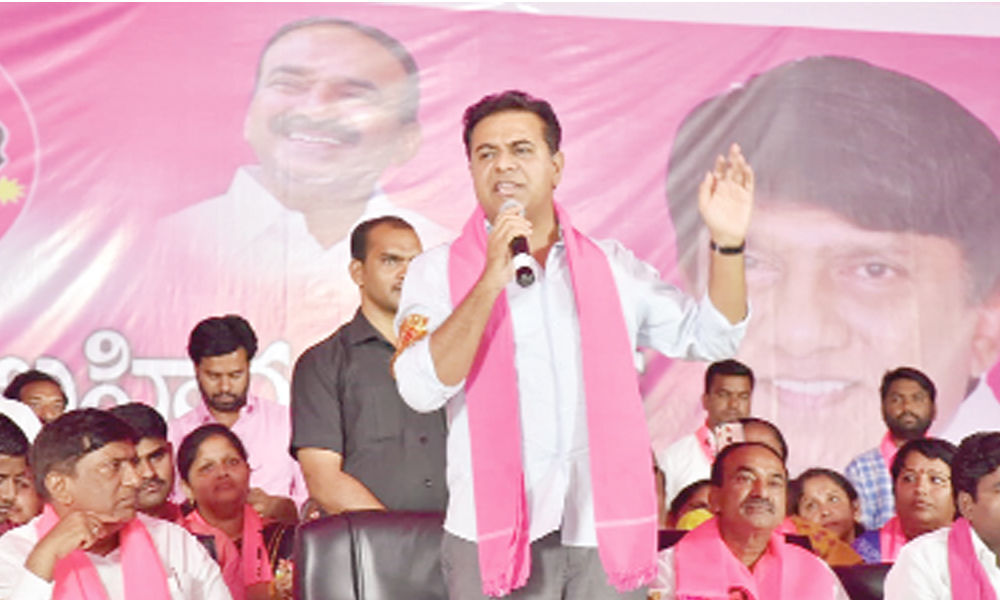 Sircilla: It would be highly helpful for Telangana State if the TRS is in Parliament, said TRS working president KT Rama Rao. KTR participated in a...

Sircilla: It would be highly helpful for Telangana State if the TRS is in Parliament, said TRS working president KT Rama Rao. KTR participated in a meeting held in Sircilla on Monday in support of party MP candidate B Vinod Kumar.

Speaking at the meeting, KTR said the Telangana Rashtra Samiti is the party, which is owned by every person present in the State.

It is like 'Inti Party', like a own party of every individual. If Congress leaders, who cannot take any decision on their own, are elected, they have to visit Delhi for every small work that should be done in their respective constituencies, he mocked.

Some parties are trying to cheat the public. But people should think wisely and must cast their vote for their own party, that is TRS, KTR suggested.

The TRS working president said that the people had pinned lot of hopes on Prime Minister Narendra Modi before 2014 elections and gave him more than 240 seats. But he deceived them and did nothing to them.

The surveys clearly showing that any party - either BJP or Congress – will not get full majority in the coming LS elections. So, it is crucial for the TRS to win 16 LS seats. 'We get national status for Kaleshwaram project and clearance for other developmental works,' he said.

KTR reminded that Chief Minister K Chandrashekar Rao is striving hard to lead the State towards development and for achieving Bangaru Telangana. KCR is going to become role model for coming up generations and for the nation.

All other States are copying KCR's schemes and trying hard to follow him. Even Andhra Pradesh Chief Minister N Chandrababu Naidu is also dreaming to become like Chief Minister KCR, which is simply impossible to him, KTR stated.

The people of Sircilla district must cast their vote to TRS candidate Boinapalli Vinod Kumar and must elect him for the second time with bumper majority,