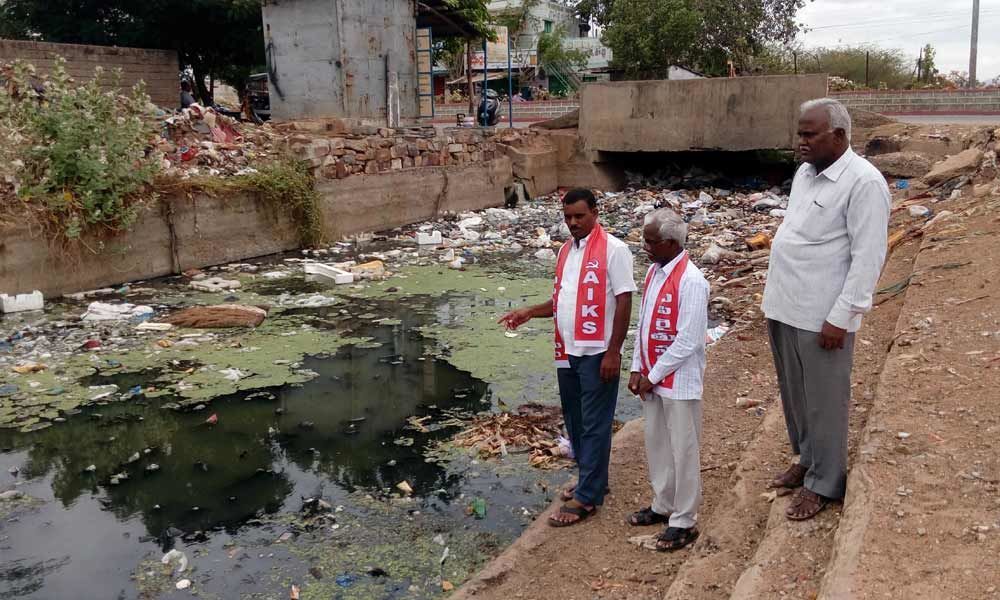 Farmers in the district who are performing cultivation by using water from irrigation canals are now in lurch with the most of canals not in a position to supply sufficient water to the fields, as they are clogged with silt and water Hyacinth (Gurrapu Dekka).

Kadapa: Farmers in the district who are performing cultivation by using water from irrigation canals are now in lurch with the most of canals not in a position to supply sufficient water to the fields, as they are clogged with silt and water Hyacinth (Gurrapu Dekka). This shortage of water supply is going to affect the outcome of the crop this Kharif season.

Farmers had proposed to irrigate crops under through various sources like Rain Fed Tanks(RFT), Brahmam Sagar, Gandikota, Kundu-Penna flood cnal, KC Canal, Mylavaram, etc reservoirs, minor irrigation tanks, small water bodies around 5lakh acres during the Kharif season. Apart from KC canal is playing key role in supplying the water through irrigation canals for agriculture operations around 60,000 acres to the villages like Palempalle, Butchampalle, Alankhan Palle, Ramanujulapalle, etc 20 villages which are located in 15Km distance from Kadapa headquarters. The administration supplying the water through KC canal these villages in every Kharif season.

During the Kharif season water will reaches to old Kadapa tank from Adinimmayapalle anecut as the KC canal receives water and supply the irrigation canals for farming operations from September month for Kharif season. The canal which is constructed for drawing water from old Kadapa tank is in bad condition. The canal sidewalls appear to be fragile and may crack any time. The KC canal at the areas like Built up and Durga temple have encroached as the people constructed houses and other business establishments both sides of the canals. The same situation witnessing at several places where the farmers growing crops under irrigation canals.

"Due to formation of silt and Hyacinth in the irrigation canals, we are not able to secure the water for agriculture operations. This is the naked fact as the administration well aware of the issue but they have no time to address the issue as they are engaging busy with other activities by leaving the farmers of their fate". V. Krishna Reddy Palem Palle village told

"The aim of the government in supplying water through irrigation canals will not be fulfilled following they were clogged with silt. The AP Rythu Sangam had brought the issue to the notice of the administration through submitting memorandums but in vain as the official machinery either over the removal of encroachments or removing silt and Hyacinth in irrigation canals" said AP Rythu Sangam district secretary B.Dastagiri Reddy.