A rollercoaster ride for Jagan to the top post 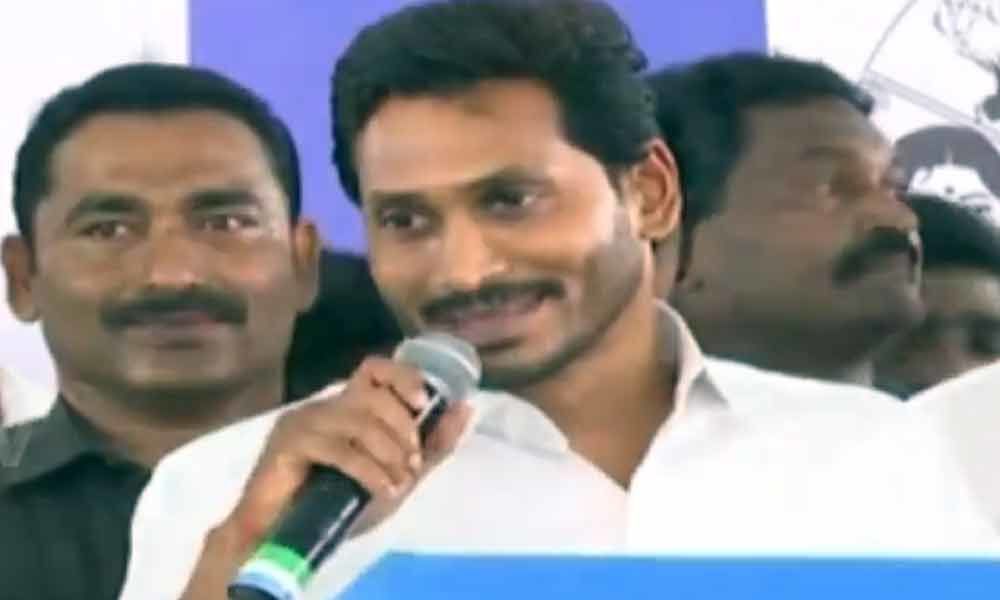 From a small-time businessman to a formidable political leader, YSR Congress president Yeduguri Sandinti Jaganmohan Reddy popularly known as Jagan has had a rather smooth and bumpy ride in the last two decades of his career.

Amaravati(AP): From a small-time businessman to a formidable political leader, YSR Congress president Yeduguri Sandinti Jaganmohan Reddy popularly known as Jagan has had a rather smooth and bumpy ride in the last two decades of his career.

While the first decade of his career was spent in building a business in a hassle-free manner, the second decade had been tumultuous for Reddy as he set on the political path.

But his single-minded focus of becoming Chief Minister paid off as his YSR Congress Party is poised to secure a landslide win in the Andhra Pradesh Assembly polls.

It was virtually a ten-year wait that's coming to a happy end for the 47-year-old leader, who nurtured the ambition of becoming Chief Minister soon after his father's death in September 2009.

The only son of former Chief Minister of (united) Andhra Pradesh, late Y S Rajasekhara Reddy, Jaganmohan Reddy began his business career in 1999-2000 by establishing a power company Sandur in neighbouring Karnataka and then expanding it to the north-eastern states.

His business graph rose meteorically once his father became the state Chief Minister in 2004 and Jagan started venturing into many other businesses including cement plants, infrastructure and media.

Jagan's political ambitions were first revealed in late 2004 when he aspired to become an MP from his home turf Kadapa but the Congress high command nipped that in the bud.

He had to wait till 2009 to fulfilhis dream and make a formal political debut by winning the Kadapa Lok Sabha seat as Congress nominee.

His father's tragic death in a helicopter crash in September 2009, literally changed everything for Jagan.

He wanted to succeed his late father to the Chief Minister's throne but the Congress high command was unwilling to grant him the wish despite a majority of legislators rallying behind him.

Disillusioned, Jagan gradually began defying the Congress bosses and, by early 2010 was meticulously charting his own course.

He took the 'Odarpu Yatra' route to build his political career independently, much to the Congress' discomfiture.

Jagan's emergence as "leader" began with the Odarpu Yatra as he went round villages and districts to console families whose kin allegedly committed suicide following YSR's sudden demise.

In no time, his popularity graph shot upwards steadily while that of the ruling Congress' dipped gradually.

He succeeded in striking a positive chord with common people largely based on the goodwill that his late father earned for himself through a slew of "welfare" programmes.

As the Congress objected to his yatra and rejected "permission," Jagan decided to snap his association with the party.

The flashpoint came in November 2010 when the Congress made N Kiran Kumar Reddy the Chief Minister of AP in place of ageing K Rosaiah in an ostensible bid to effectively counter Jagan.

On November 29, 2010, Jagan called it quits and walked out of the Congress, which his father loyally served for three decades, and also resigned from his Lok Sabha membership.

In March 2011, Jagan announced the setting up of his own Yuvajana Sramika Rythu Congress YSR Congress throwing a challenge primarily at Congress and also Telugu Desam Party.

He won the by-election to Kadapa Lok Sabha seat with a record margin of over five lakh votes in May 2011 while his mother Y S Vijayamma won the Pulivendula Assembly seat in an emphatic fashion.

There was no looking back thereafter as the fledgling YSRC won successive by-elections in the then united state and emerged as the favourite to caputre power.

But, the bifurcation of AP put paid to Jagan's ambitions as the voters preferred an experienced Chandrababu Naidu over the upcoming politician to rule the truncated state.

Jagan was charged by the CBI in several cases under the Prevention of Corruption Act, Money Laundering Act and also IPC in alleged quid pro quo deals that were struck during his father's tenure as Chief Minister.

He was arrested on May 27, 2012 and had to spend 16-odd months in jail as an "un-convicted criminal prisoner" in the spate of corruption cases.

He is still attending trial in these cases in the special CBI court in Hyderabad.