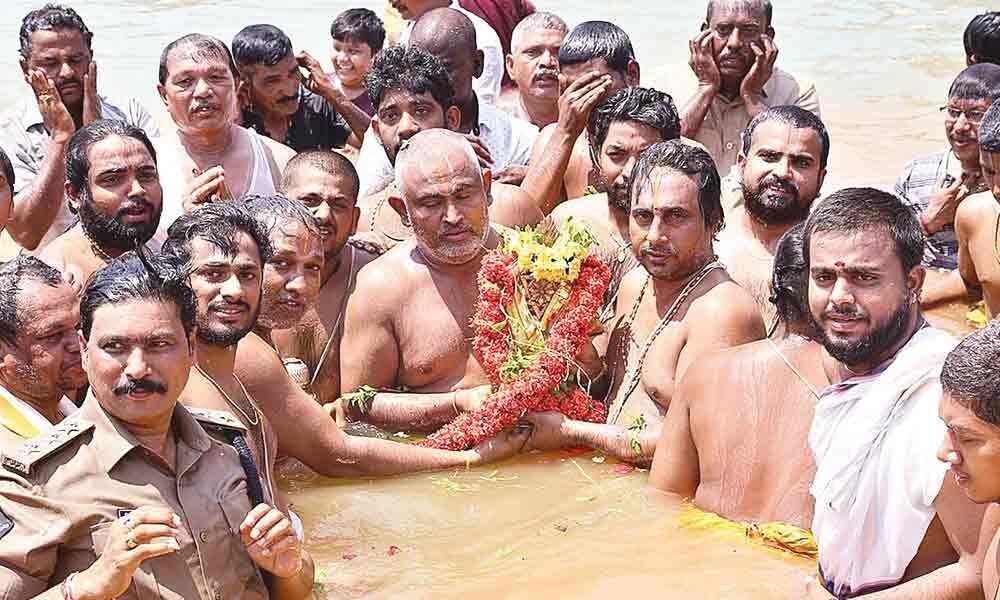 The 11-day annual Brahmotsavam of Lord Kodanda Rama Swamy at Vontimitta in the district concluded with Chakrasnanam at Pushkarini on Sunday.

Kadapa: The 11-day annual Brahmotsavam of Lord Kodanda Rama Swamy at Vontimitta in the district concluded with Chakrasnanam at Pushkarini on Sunday. At the crack of the dawn, the idols of Lord Rama and his consort Goddess Sita, Lakshmana Swamy, along with Tiruchi Sudarsana Chakrathalwar were taken out in a procession.

After completion of the rituals, the priests performed Snapanatirumanjanam Tirumanjanam by chanting Purusha Suktham, Sthree Suktham followed by Chakrasnanam. Devotees in large numbers who had gathered at the steps of the temple waited patiently for the auspicious moment and took a holy dip in the newly constructed Pushkarini on the premises of the temple after the idol of Lord Chakrathalwar was immersed in the tank amid chanting of 'Jai Sri Ram'.

The temple authorities deployed expert swimmers at the tank as precautionary measure. In the evening, Dwaja Avarohanam marked the conclusion of Brahmostavams which was followed by Vunjal Seva to the Lord.