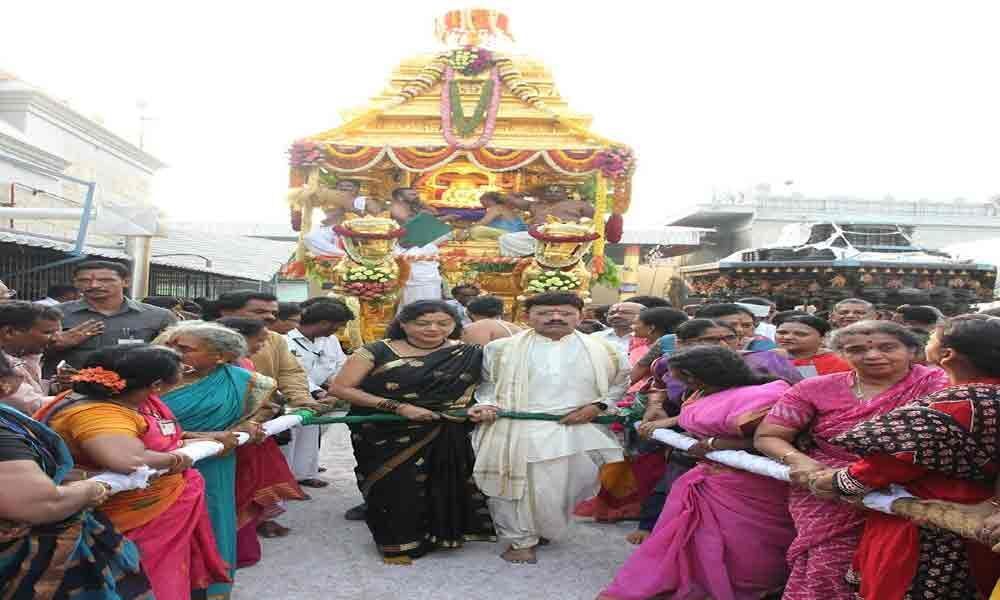 x
Golden chariot procession being held in Tiruchanur on the second of day Vasanthotsavam on Saturday; (right) As part of ongoing annual Brahmotsavams, the deities of Lord Govindaraja Swamy and his two consorts being taken in a procession atop a wooden chariot in Tirupati on Saturday
Highlights

It is a double spiritual delight for the denizens as well as the pilgrims as they participated in two Rathotsavams - a wooden chariot festival in Tirupati and a golden chariot procession in Tiruchanur, on Saturday.

Tirupati: It is a double spiritual delight for the denizens as well as the pilgrims as they participated in two Rathotsavams - a wooden chariot festival in Tirupati and a golden chariot procession in Tiruchanur, on Saturday.

The procession of the mammoth wooden chariot of Sri Govinda Raja Swamy temple was held on the penultimate day of annual Brahmotsavams in Tirupati on Saturday morning. The deities of Sri Govindaraja Swamy along with Sridevi and Bhudevi were seated on the flower decked and richly decorated huge wooden chariot and were taken on a procession along the Mada streets in Tirupati enthralling the devotees. Devotees who thronged in good number to witness the celestial procession chanted Govinda... Govinda in ecstasy.

Meanwhile in Tiruchanur, 5 km away from here, the celestial Swarna Rathotsavam was conducted with utmost religious fervour on Saturday. As a part of the annual Vasanthotsavams, on second day morning, the processional deity of Sri Padmavathi was taken on a celestial ride on Swarna Ratham, the golden chariot along the four Mada streets encircling the shrine feasting the eyes of devotees who gathered to witness the chariot procession. TTD Tirupati JEO B Lakshmikantham ,Temple DyEO Jhansi Rani and other temple officials were present.