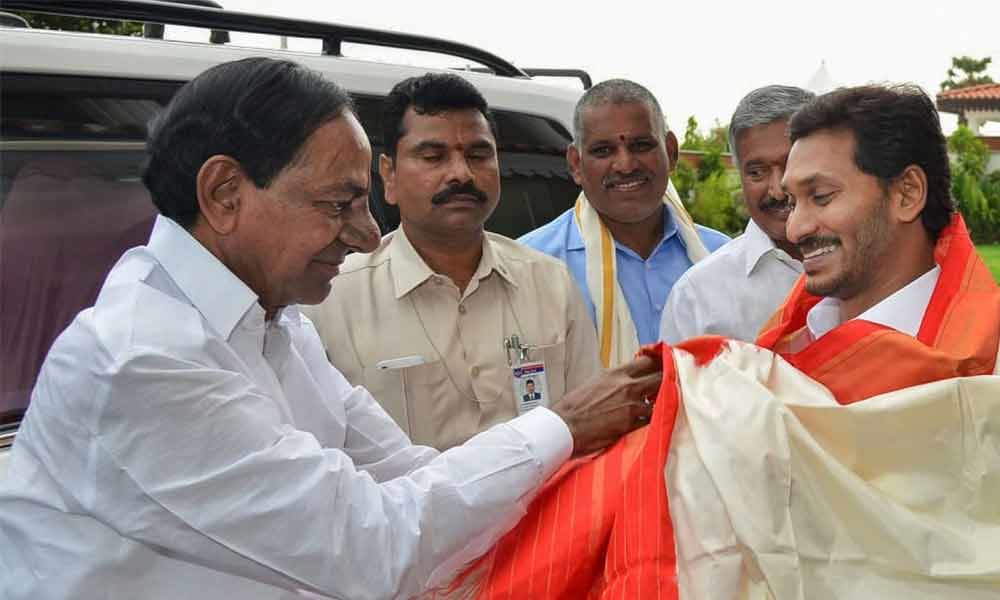 This decision was taken following the personal invitation extended by Chief Minister of Telangana K Chandrashekar Rao who specially flew in to Vijayawada along with his son and TRS working president K T Rama Rao, former MP B Vinod Kumar and TRS leader Santosh and P Rajeshwar Reddy.

As a gesture of good will, the Andhra Pradesh Chief Minister hosted lunch for Rao. The two chief ministers are said to have discussed a host of issues related to the two states. He played host to the Telangana chief minister after his swearing-in as AP CM on May 30.

The two Chief Ministers were said to have discussed several issues related to the two states. It is learnt that the sharing of properties and institutions which are under the Schedule IX and X of the Constitution came up for discussion.

According to information, the two Chief Ministers discussed the sharing of RTC properties, Krishna river water and other properties located in Hyderabad. It is said that both the leaders decided to resolve all pending issues amicably.

KCR was accorded a grand reception in Vijayawada. Chief Minister Jagan Mohan Reddy, who was in Assembly, reached his residence at Tadepally and welcomed KCR with a bouquet.

From there, KCR drove to the hill-shrine of Goddess Kanaka Durga, the presiding deity of Vijayawada, where he was received with full temple honours.

He placed an invitation card of the Kaleswaram project at the Goddess feet and offered special prayers. He then drove to the AP CM's residence.

On way to CM's house, KCR stopped a while on the Prakasam Barrage, got down from his vehicle and asked the officials from where so much of water was available at the barrage.

Officials told him that it was from Pattiseema. He spent few minutes there and enjoyed the pleasant weather.