Prices of veggies hit the roof in city 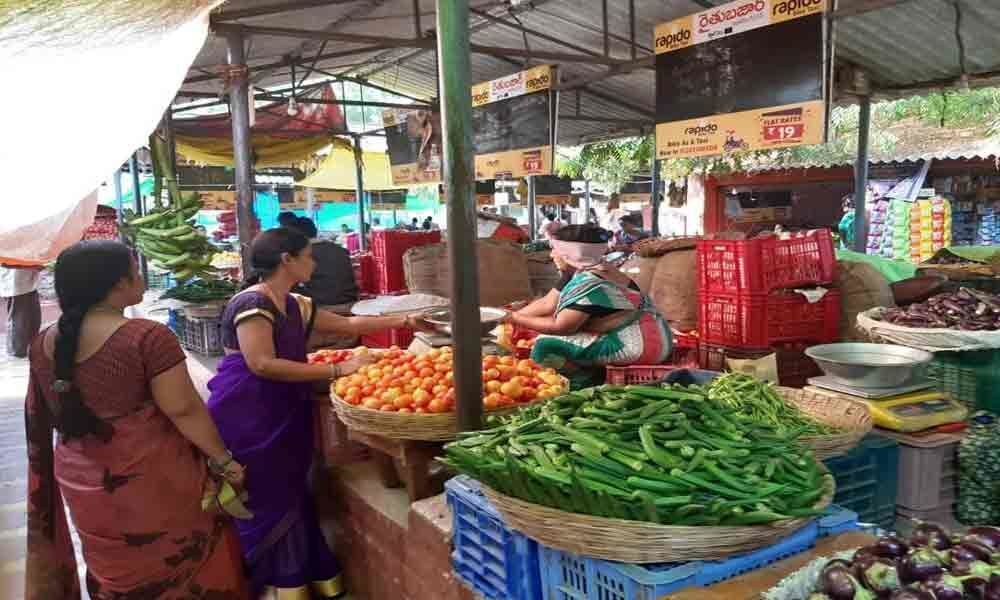 x
Prices of veggies hit the roof in city
Highlights

Prices of vegetables are skyrocketing in the city due to shortage of supplies from other districts and neighbouring states.

Vijayawada: Prices of vegetables are skyrocketing in the city due to shortage of supplies from other districts and neighbouring states. The prices of tomatoes, green chilly, brinjal, Gherkins and other vegetables are increasing continuously. As a result, the middle-class people are feeling the pinch of burden.

It is expected the high prices may continue one more month. Most buyers are habituated to buy veggies in Rythu Bazaars because of the prices are low compared to other markets. Tomato prices skyrocketed to Rs 38 a kg in Rythu Bazaars on Saturday.

The price rise began in the first week of April and been continuing since then. A kg tomato was sold for only Rs 22 on April 8. After that the price shot up to Rs 32 suddenly and now reached to Rs 38 a kg. The prices of tomatoes may reach Rs 50 if the supplies from Madanapalle in Chittoor district come down further.

S Karunakar, Estate Officer, Ajit Singh Nagar Rythu Bazaar said that Madanapalle has become the biggest market for tomatoes and buyers from four south Indian states are depending on this market. He said the tomatoes supplied from Madanapalle have declined to the city resulting in the skyrocketing of prices.

If the buyers buy in huge quantities, the traders will place orders from other districts and states. But the consumers are not willing to buy tomatoes in more quantity due to high prices. The price of Green chilly increased to Rs 54 a kg. The price was only Rs.28 a kg in the first week of April. In less than, one-and-half month, the price reached to Rs 54. Vijayawada is depending on Guntur district for green chilly.

Farmers are facing many problems to get labourers for chilli harvesting in the summer. Moreover, the labour is also demand more wages for work in the summer. Consequently, the chilli farmers are not able to supply more quantities to the city.

The price of brinjal increased from Rs 12 to Rs 26 in one month. On Saturday, the price of brinjal is Rs 26 a kg. Carrot price is Rs 44 a kg, gherkins Rs 22, beet root Rs 24, French beans Rs 100, capsicum Rs 44, beans Rs 48. The only consolation to common people is the prices of potatoes and lady finger are available for Rs.18 and Rs 12 a kg respectively.

Demand for vegetable is naturally high in summer as most people reluctant to take non-vegetarian food like chicken and mutton and buy only veggies. Marriages, functions like housewarming functions are performed in summer due to vacation. In this backdrop demand for veggies will continue for some more weeks.

Vegetable production will naturally increase in the rainy season, which begins next month. There is a possibility of falling of prices particularly, the tomatoes, brinjal, chilli, gherkins next month. Till then, the high prices will continue in the city.