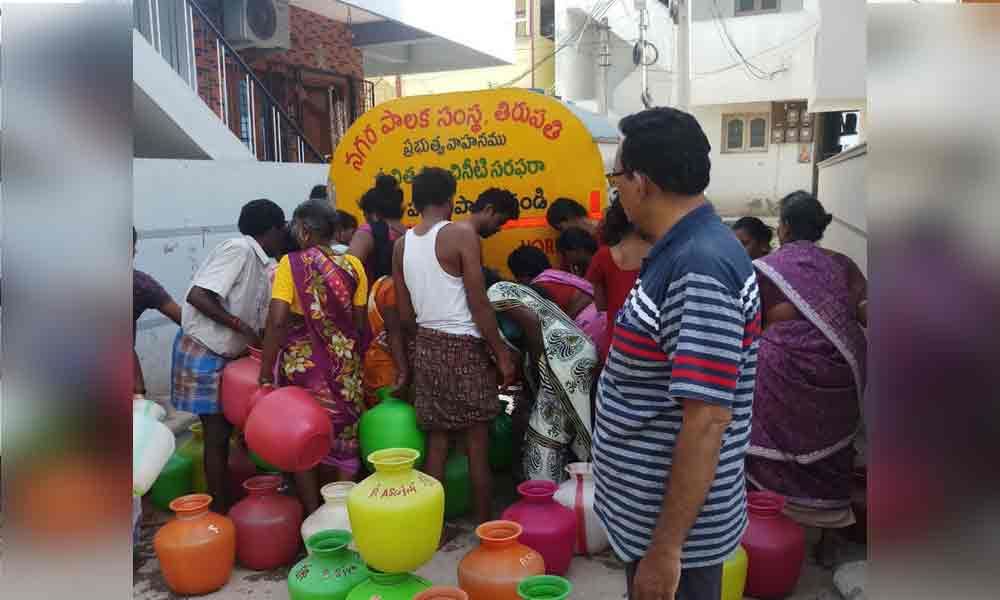 Municipal Corporation of Tirupati (MCT) has set up special teams with staff to address the severe water crisis in the city.

Tirupati: Municipal Corporation of Tirupati (MCT) has set up special teams with staff to address the severe water crisis in the city. It may be noted that there is huge shortage in supply of water to residents in the city for the last three months.

To tide over the crisis, MCT Commissioner V Vijaya Rama Raju has taken steps to address the water scarcity. For this at Corporation office, the Commissioner arranged two tollfree numbers and one WhatsApp number to bring the water tankers requirement to municipal staff concerned.

City residents can approach civic staff for water supply over 103 or 08772256766 or WhatsApp number 9849983062. More than 15 special teams set up to monitor the water supply closely in all the city zones. Everyday evening, Commissioner Raju getting reports from officials concerned on water supply position.

So far, there was a huge gap continuing between water demand and supply as the required water is 65 MLD and the available water quantity is only 45 MLD. In western parts of the city, for residents, who are depending on Telugu Ganga, officials made alternative arrangements as the water sources in Kalyani dam dried up.

A minimum 5 MLD water is being supplied to residents per day for those colonies, who are not getting water from the Kalyani Dam. In addition, more than 50 private and municipal water tankers were engaged for supplying water to various residential localities in the city. Presently, officials are adjusting the available water quantity to all residents by supplying once in three days.

But few areas which are located on the city outskirts like LS Nagar, Gayatri Nagar, SV University staff quarters and MR Palle are facing severe water crisis. To set right the water distributing system, the civic chief directed the officials to remove the motors illegally fixed to municipal taps in houses.

In view of water shortage, officials have started raids in city for removing illegally fixed motors to municipal taps in houses. Speaking to The Hans India, MCT Commissioner V Vijay Rama Raju said that within the availability of water quantity, we are supplying required water to residents every alternative day across the city.