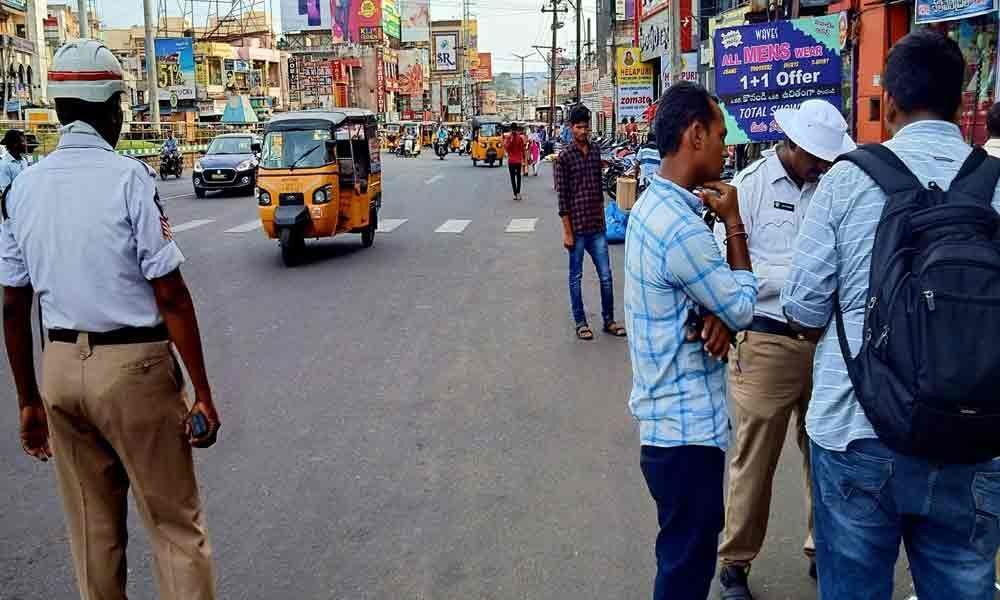 x
Traffic cops busy with their work in Visakhapatnam
Highlights

The woes of traffic cops have once again come into the picture with the death of L S Rama Krishna, II Town Traffic Head Constable, Visakhapatnam, who passed away last month due to sunstroke.

Visakhapatnam: The woes of traffic cops have once again come into the picture with the death of L S Rama Krishna, II Town Traffic Head Constable, Visakhapatnam, who passed away last month due to sunstroke.

The traffic police face a number of health issues for their constant exposure to pollution in multiple forms. Rain or shine, they stand on the roads under the defective traffic umbrellas which barely protect them from harsh sunlight. Although majority of them are deprived of weekly offs throughout their service, they work with an objective to make everyone reach home safely.

Speaking on the role of public in avoiding accidents, Traffic Head Constable of Maddilapalem outpost P Nanda Kishore Kumar said, 'Self-discipline could make life easier for an individual. It is the responsibility of every individual to drive cautiously and adhere to traffic rules instead of looking out for a traffic cop to maintain order."

With the onset of summer and soaring temperatures, traffic cops find it difficult to control the public on roads. G Eswara Rao, Gollapalem traffic police, said "People don't understand that we are also humans. Sometimes we leave the outpost to solve an issue nearby and taking this as an advantage, few people break the rules and others find fault with our absence."

Traffic Head Constable at Tenneti Junction S Venkata Rao said,"We can't leave our beats even at odd times. We have to work or else roads will be chaotic and people will suffer." While the problems of traffic cops continue to mount, the degree of suffering is further more for lady traffic constables.

Unavailability of restrooms, placing of barricades on roads everyday by themselves and reckless attitude from few vehicle owners are some of the challenges they face. Traffic constable B. Bhudevi of Shantipuram point said, "The amount of work in the field is same for both men and women.

Although it is difficult to manage household works, family and children, lack of washrooms near a number of points turn out to be a cause for concern.'' The cops further stated that auto-rickshaw owners, lorry drivers and young commuters cause a lot of trouble to them and refuse to adhere to traffic rules most of the times.