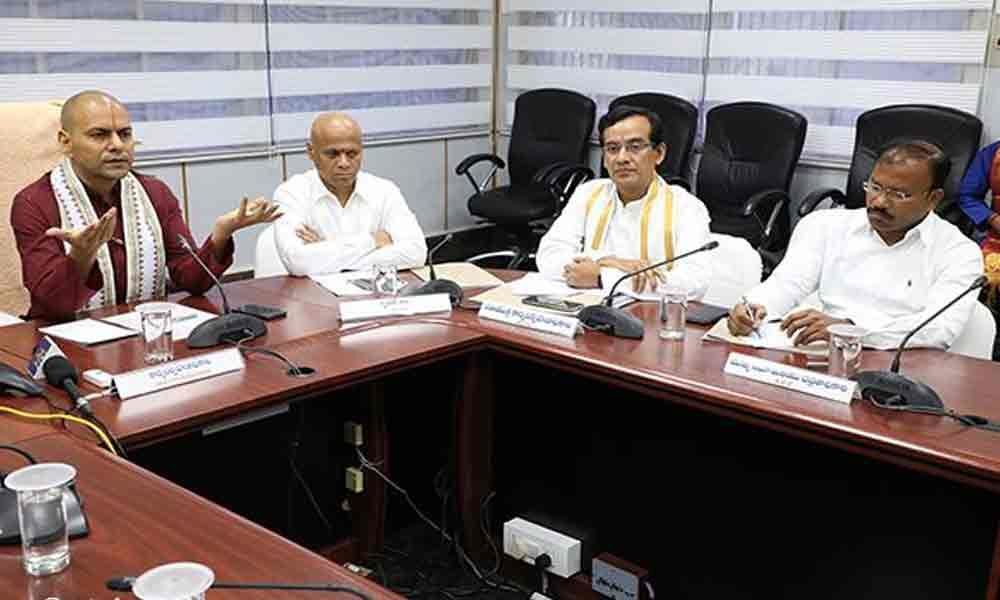 x
TTD EO Anil Kumar Singhal answering a caller in Tirumala on Friday. TTD SO Dharma Reddy and others are also seen
Highlights

Tirumala: TTD Executive Officer (EO) Anil Kumar Singhal on Friday directed the Engineering and Water Works department to take up the overhauling of the water supply system on the foot-path from Alipiri to Tirumala to ensure uninterrupted safe drinking water to the devotees trekking the hills through the pedestrian path to reach Tirumala.

During the 'Dial Your EO' programme held on Friday here, Singhal responding to the caller Prakash from Karnataka and Surya from Hyderabad on lack of proper water supply on the foot-path route and also on safe drinking water in Tirumala, EO wanted the officials concern to take the complaints seriously and take required steps immediately to ensure safe drinking water uninterruptedly.

He also sought the concerned official to enquire into the complaint to find out, who was responsible for the lapse for taking suitable action. Prakash said that he and his family, who trekked the hills on September 1 found no water in the Jalaprasadam counters set up all along the pedestrian path up to Anjaneya temple and the water found in the next point was muddy and not fit for drinking, leaving the family and also other pilgrims in lurch.

The EO said that any laxity on the part of employees in ensuring round-the-clock safe drinking water through Jalaprasadams set up on footpaths and also in Tirumala will undermine the TTD efforts to make Tirumala completely plastic free.

The TTD has taken up a vigorous campaign informing the pilgrims not to go for water bottles and make use of Jalaprasadam counters which are available round-the-clock. Water will be provided at free of cost at all places in Tirumala and other places to discourage plastic use, he explained while stressing the concerned officials to take up an overview of the water supply system.

Another pilgrim complained against temple employees and alleged that they are allowing persons without valid authorisation for performing Angapradakshinam in the temple causing inconvenience to other devotees, who waited for long for doing Angapradakshinam.

Singhal assured the pilgrim that he would seek the vigilance authorities to enquire and see no one allowed to do Angapradakshinam without valid prior permission. Answering pilgrim caller Chandrasekhar from Gudivada, who sought EO to go in for an advanced system of scanning at Alipiri as the present system is causing a lot of inconvenience to aged persons, the EO said, TTD has been studying all options and even held negotiations with overseas companies. But we are still in need of the right technology to suffice our needs", he added.

A pilgrim caller Rameshwar from Nashik brought to the notice of EO that his entire family fell sick after trekking the Alipiri footpath in the late night as they missed Rs 300 special entry darshan due to delay of their train.

Answering the caller, the EO said, it is not possible to accommodate them in the next hour darshan as already that slot will be full. However, the Sarva Darshan tokens are issued in Tirupati from 4 am onwards every day.

And that could have been a better alternative if the information is known to pilgrim since all the slotted darshans whether it is Sarva Darshan or Rs 300 or Divya Darshan takes the same time. In all, 22 callers from various places put forth their complaints and suggestions in the programme to EO.