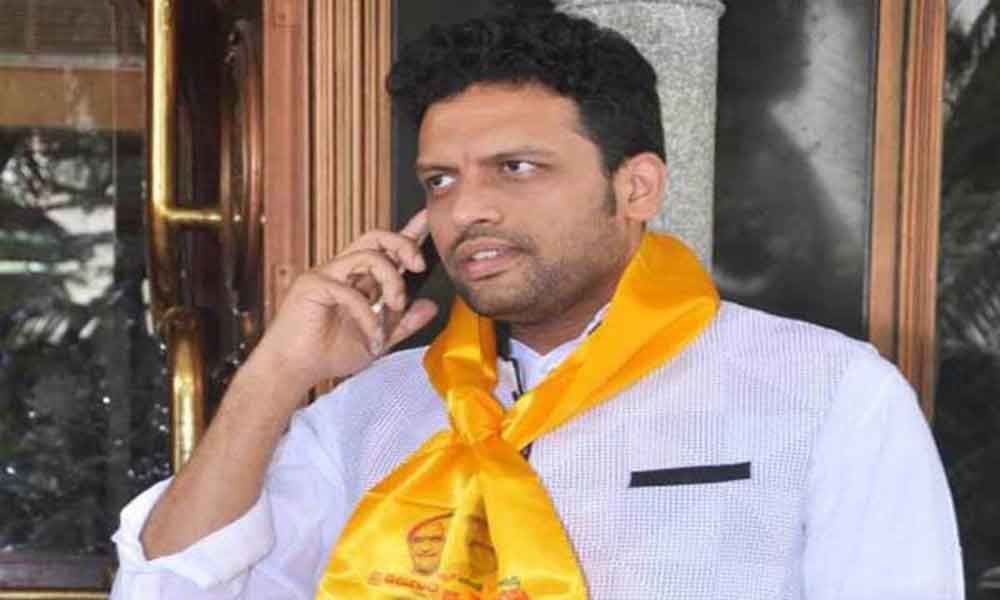 The four Rajya Sabha MP's have left the TDP and joined the BJP on Thursday. The Kurnool district senior leader and MP TG Venkatesh is also one among them.

Amaravati: The four Rajya Sabha MP's have left the TDP and joined the BJP on Thursday. The Kurnool district senior leader and MP TG Venkatesh is also one among them.

On the occasion, TG Venkatesh's son Bharat has responded over the issue. Where he clarified that though his father joined the BJP, he'll continue in the TDP.

In recent elections, TG Bharat has contested as TDP MLA candidate from Kurnool Assembly constituency and got defeated to the YSRCP candidate with nearly 4,000 votes margin.

With TG Venkatesh joining the BJP, Bharat was also expected to follow his father's footsteps. But interestingly Bharat confirmed that he will not quit the TDP. He also said that the something was clarified to Nara Lokesh over the phone.

Bharat said that his father Venkatesh has phoned him that he is joining the BJP and also said him to choose any party where he can stay. Not only this, soon after joining the BJP he has called up TDP national general secretary Nara Lokesh and said about the joining. Where Bharat said to Lokesh that he will continue in the TDP.

He remembered that in spite of the pressures, Chandrababu Naidu has trusted him and given him the party ticket in the Assembly elections.

Bharat said that he will meet Chandrababu Naidu and Lokesh once they return from the foreign tour.

After the state bifurcation, TG Venkatesh has left the Congress party and joined the TDP. In 2014 elections he contested in the election and lost to the YSRCP candidate. Later, TDP supremo has appointed him as a Rajya Sabha member.

As his political successor, TG Bharat has entered into politics. In 2019 elections, Bharat got the TDP MLA ticket but lost the election with a close margin.