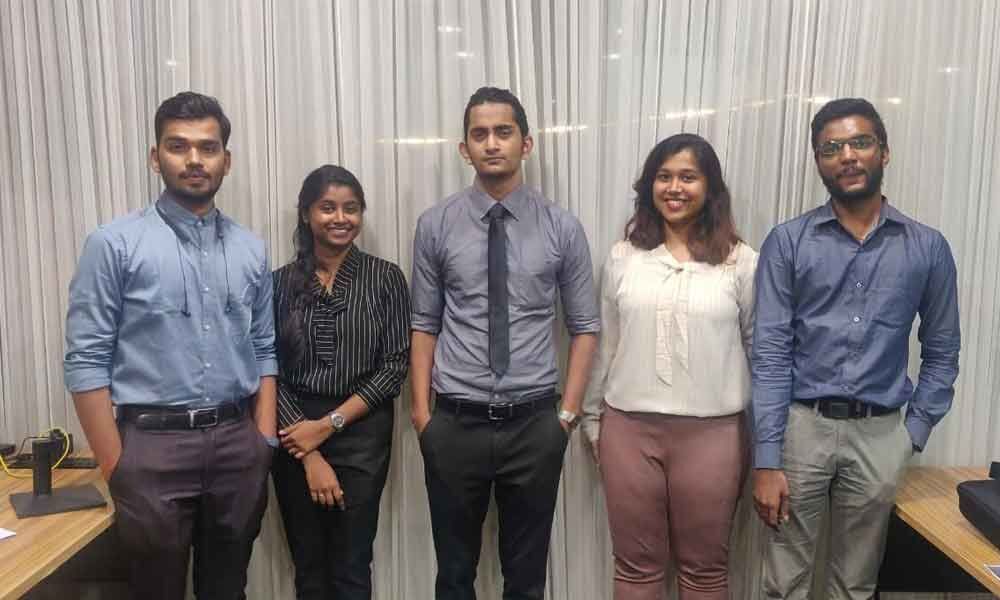 With several Indian cities emerging as IT hubs, the most sought-after educational stream, without any doubt, has been engineering, especially computer science and information technology.

With several Indian cities emerging as IT hubs, the most sought-after educational stream, without any doubt, has been engineering, especially computer science and information technology.

Down the lane, now in 2019, the number of engineering students graduating every year is increasing compared to those students securing a job. Moreover, India is at the crossroad of new technologies gaining demand and need of upskilling for the students.

Amid all these uncertainties, a relief for engineering students willing to risk on are 'startups.' One such Hyderabad boy who has walked a long way from 2017, is 21-year-old B Saurav.

A freshly graduated engineering student, Saurav's first stint as a co-founder of a startup was while he was in his third year. During this course, he was attracted to new technologies like augmented reality and virtual reality, which made him to found edutech based startup, EduRidge.

Speaking with The Hans India, B Saurav, Founder, EduRidge, says: "As a student, I was able to learn only the basics in college. I had a thirst to know more about new technologies which our education system does probably provide but we are not up to the mark of further building our knowledge based on those basics.

Thus, I wanted to give these students the first push towards learning and knowing about new technologies. Instead of starting off with building products, we took the first step of teaching students about AR and VR."

A core team of six engineering graduates, EduRidge is on a mission to create awareness about AR and VR, by conducting two-day workshops across engineering and architecture colleges in India. They also hold 30- and 60-days course.

The startup levies a fee of Rs 500 per person, for the workshop conducted for a batch of 60 students, whereas the AR and VR course to become a developer is around Rs 20,000, with a restriction of maximum three students for one teacher.

In one-year, the startup has covered 20 colleges across India, having thought basics of this technology to 1,500 students.

From this, further 30 students from various cities have taken up the training course in Hyderabad, at EduRidge's official spaces at Banjara Hills, Madhapur and Musheerabad.

EduRidge has four full-time employees, ten students as interns and three trainers led by Anil Kumar Alla, an expert in this technology.

"You are way more talented than what you are right now.

You are using AR and VR in your daily life, but what if you could develop it…this is what we ask the engineering students. Tomorrow when AR becomes a big thing in India, these 30 students who have taken this course will be the first ones to be hired," Saurav claims.

The startup which has been bootstrapped till date, has taken one step ahead with funds raised from the US-based company Xlenz. Surya Kotha, the founder of Xlenz, has picked 60 per cent stake in EduRidge, while Saurav in the deal has received 10 per cent in Xlenz along with monetary support.

The founder, however, did not disclose the amount of investment gained or revenue earned.

With this deal in place, Saurav will lead the India operations of Xlenz. He goes on to say, "we knew that EduRidge could not stick to training only and had to move ahead into developing applications. This was our end goal and now we are here – a new beginning to a beautiful end."

Further, he informs, "we have already begun building prototypes and at present, we are working on a project. As Xlenz is a California-based company, our clients along with that from India, are widely from California too."

Coming to the workshop initiative, EduRidge by end of 2020 plans to cover 50 colleges in Hyderabad so as to educate a greater number of students about AR and VR.

The founder is also in talks with Vogue Institute to build 3D models of their product designs. Besides, they are looking to collaborate with the universities in India, which will fast-track their reach to students.

According to Saurav, there are nearly 170 engineering colleges and a minimum of 70,000 students graduating from this city every year. The question that he finds hard to answer is - how many students are getting placed.

However, one solution he does have, is to target the untapped industry in the country.

As he informs, across the globe, the valuation of AR right now stands at $3.5 billion. And, by 2020 it is expected that there will be one billion augmented reality users.

"The best part of AR, VR is that a student from any stream of engineering can get trained in it.

If one per cent of the one lakh engineering students graduating every year take up AR, VR -- in the next two years there will be a high-valued company in this field, here itself.

We need to start small and that's the small first step I have taken," Saurav concludes.